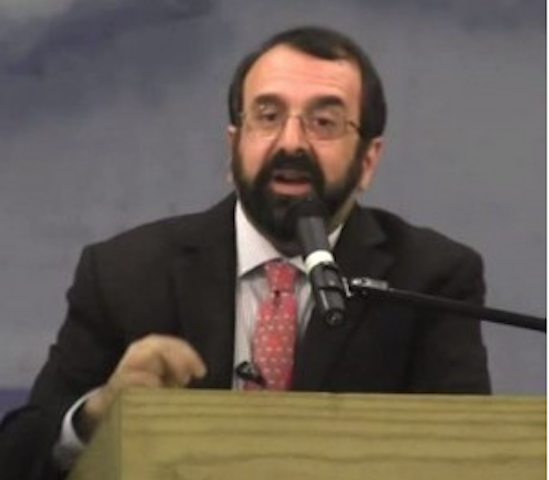 Statement from Robert Spencer about the Garland, Texas shooting (via JihadWatch.org):

“Here is a fine account of my talk at the University of Wisconsin Madison on April 29, in which I warned about the Islamic State striking in the U.S. — just days before what appear to be a couple of Islamic State jihadis tried to commit jihad mass murder at our AFDI/Jihad Watch Muhammad Art Exhibit and Cartoon Contest in Garland, Texas.

Three days before a shooting in which two gunmen were shot dead by police after they open fire at a Mohammed cartoon event in Texas, college students in Wisconsin were warned Islamic radicals are living in America.

Not only that, Jihad expert Robert Spencer – who was present Sunday at the event in Texas that was attacked – told University of Wisconsin Madison students in a guest appearance that ISIS and radical Islamic terrorists want to kill Americans.

He began his talk by asking students why it’s important to care about ISIS, then bluntly answered his own question: “It matters because they want to kill you.”

In his Thursday speech, Spencer said ISIS has issued orders to their members in America to murder people and “if you can’t shoot them, then run them down with your car.”

After the shooting Sunday night, Spencer tweeted: “The shooting outside our free speech event shows once again that moderate Muslims are unable or unwilling to rein in their violent brethren.” RobertSpencer

Details about the two slain suspects, other than they are male, have yet to be released by authorities as of late Sunday night. It remained unclear several hours after the shooting whether it was related to event, but organizers have indicated their belief that it was.

And The Los Angeles Times reports the shooting was “preceded by messages from two social media accounts that expressed radical Islamic viewpoints.”

“One tweet …used the hashtag #texasattack. The user wrote, ‘May Allah accept us as mujahideen.’”

The event, a Mohammed Art Exhibit and Contest, had been criticized as a direct attack on Islam, but organizers said it was about the right to free speech.

As for Spencer, in his UW-Madison speech on Thursday, he had said he remembered a time when CIA counter-terrorism trainings included words like “Islam” and “Jihad.” But today, he added, those words can’t even be uttered in such trainings.

How does he know? Spencer used to lead some of them. But more recently he was shut down after CIA Chief John Brennan changed the policy on discussing Islam. Brennan has also publicly insisted that ISIS members are not “Islamic.”

“They came in and said, ‘You’ve got to get rid of Spencer and others talking about Islam,’” Spencer recalled. “You can’t mention Islam or Jihad in counter-terror training.”

He made the comments before a room of University of Wisconsin-Madison students, informing them of the political correctness that has taken hold of the Central Intelligence Agency – intellectual failures that he contends has led to the death of Americans.

Spencer, invited to speak on campus by the conservative campus group Young Americans for Freedom, told students he was extremely critical of this policy, and blamed it in part for radical Islam attacks in the United States, most notably the terror attack at Fort Hood by Major Nidal Malik Hasan and the Boston Marathon bombers.

He talked about how the government is afraid to confront very visible red flags like Hasan because they don’t want to be branded racist, bigots or Islamaphobics. Spencer was equally critical on the government in regard to the intelligence community’s failure to properly listen to warnings.

According to Spencer, the Boston bombings could have been stopped if “the FBI took the intel they got from the Russians seriously.” He was also quick to point out that the failures to combat radical Islam is not a partisan issue.

Spencer was brought in by Young Americans for Freedom because he’s talking about important subjects students do not get anywhere else, organizers said.

“It’s something really important that should be discussed,” YAF co-chair Kelly Ward told The College Fix.

In the past, Spencer led seminars on Islam and jihad for the United States Central Command, United States Army Command, the U.S. Army’s Asymmetric Warfare Group, the FBI, the Joint Terrorism Task Force and other agencies.

Spencer didn’t mince words with the 30 or so students in the audience, a speech given with armed security, including local UW-Madison police, on hand.

Spencer also took a couple of direct shots at President Barack Obama and Secretary of State John Kerry for not properly identifying ISIS as Islamic and saying their murderous actions have nothing to do with Islam.

“They [ISIS] say they’re the most Islamic thing around…Al-Qaeda, Hamas, and Boko Haram all seek to restore the caliphate. ISIS finally did it,” he said.

Hillary Clinton: The Secretary Disavows Any Knowledge of Her Actions

Common Core's Arne Duncan Is At It Again...