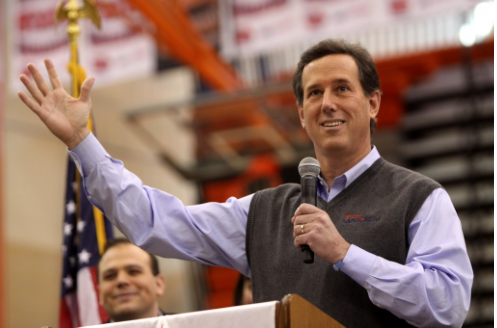 CABOT, Pa. — Rick Santorum, who won 11 states during the 2012 Republican presidential nomination, announced his second presidential bid in his hometown in Butler, Pennsylvania, on Wednesday, pledging to fight for the American working class.   “We are not going be successful unless we have a message that talks to the people who are struggling to rise,” Santorum said.

Focusing on a blue-collar approach domestic agenda such as working families, Santorum called for an overhaul of the tax code to encourage “working, saving and giving while discouraging overconsumption. Working families don’t need another president tied to big government or big money, and today is the day we are going to begin to fight back,” Santorum told a cheering crowd. “I am running for president of the United States.”

The former Pennsylvania Senator turned two-time presidential candidate enters a more powerful and diverse 2016 field compare to 2012. As a heavy underdog polling right now at two percent, according to Real Clear Politics, Santorum may struggle to even qualify for the first presidential debate stage in his second run. According to FOX News who will be hosting the first Republican presidential debate in August, only the top 10 candidates will be allowed to participate.

Many forget how Santorum was strong in the last presidential rounds, winning not only just the Iowa caucus but also 10 other states during the 2012 primaries becoming the runner-up before dropping out in April, 2012 to Mitt Romney, the Republican nominate who eventually lost to President Obama. This time around won’t be an easy challenge as several other social conservative declared candidates such as Senator Ted Cruz and former Arkansas Governor Mike Huckabee in the race are looking to gain the Evangelical votes.

Santorum is considered the most prominent social conservative candidate with his vocal stands on pro-life and opposing same-sex marriage while advocating for Christian family values. In his speech bid, he mentioned social issues very briefly, only to intertwine his remarks to working-class Americans. “As president, I will stand for the principle that every life matters—the poor, the disabled, and the unborn.”

This time, Santorum is also focusing on foreign policy, highlighting his eight years on the Senate Armed Services Committee. With the growing threat of the rise of ISIS, Santorum said he is best positioned with his credentials to take on former Secretary of the State Hillary Clinton for president.

“The last race, we changed the debate. This race, with your help and God’s grace, we can change this nation.”

According to Santorum campaign, following his campaign kickoff, Santorum is launching a “Take Back America Tour” in Iowa on Thursday and Friday before heading to South Carolina this weekend.

Santorum is now the 7th official candidate to announce a bid for the presidency as the field that is ever-growing with former New York Governor George Pataki and Senator Lindsey Graham announcing this Thursday along with former Texas Governor Rick Perry announcing next week their bid. Other candidates such as Governor Scott Walker, Governor Bobby Jindal and former Governor Jeb Bush are preparing for the race but haven’t announced a date for their bid.

Seeking Truth About the Death of American Hostage Kayla Mueller