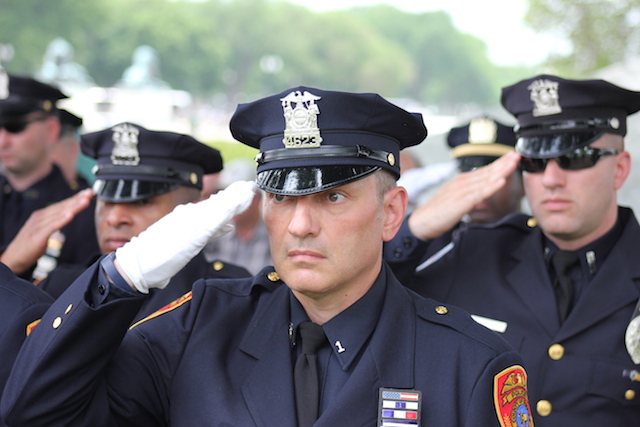 In the wake of incidents such as those seen in Mississippi, Maryland, New York, and Florida, it has become the new normal to disparage the police, questioning not only their competence as law enforcement officers but even their integrity and professional ethics. Regardless of circumstances, it seems, every time a police officer is put in the position of having to shoot a suspect that officer is immediately and mercilessly accused of racist behavior and hateful police brutality if the suspect is of color. Little if anything, of course, is made of what the slain was doing prior to being killed; one recent incident saw a man waving a metal sword – not a toy – at a police officer, having earlier posted on Facebook that he was planning to get himself killed. It was “suicide by cop,” yet when deadly force was used, the police still were blamed.

American police officers have one of the most difficult jobs in the world. This is because the fact that they live in the “Land of the Free” actually means something to them, and they are required to carefully observe and respect every suspect’s constitutional and civil rights even when doing so may place the officer in even greater danger. He is forced, in essence, to be an amateur lawyer without the benefit of formal legal training, needing to know precisely when he is allowed to search, when he can make an arrest, and when he can use force to protect his own life. Failing to strictly follow the necessary code of conduct for law enforcement places an officer in danger of lawsuits against the department, personal suspension, and even criminal charges.

From the President of the United States, sadly, there is no champion. The current occupant of the Oval Office seems all too eager to jump on the cop-bashing bandwagon. He has been known to call individual police officers “stupid” without having all information on a given incident, and has immediately expressed sympathy for suspects before the facts of a case were fully known.

No one is saying there is no such thing as a “bad cop” – but they are few and far between. Most police officers are heroes and patriots, selflessly risking their lives every day in a thankless job so that they may root out crime and make the streets safer for everyday citizens – some of whom then go on to call them racist brutes for their trouble. The police should be celebrated and appreciated, not subjected to firestorms of hate and suspicion when they are out there trying to help our families, neighbors, business owners, and friends.

Arne Duncan Reveals What He REALLY Wants For Nation's Schools