It’s said that every picture tells a story, and that every picture is worth a thousand words.  Sometimes words paint pictures, and photographs remind us of words from long ago. The words “Greater love hath no man than this, that a man lay down his life for his friends” from the Book of John describes the love of our Savior by giving His life for us all. It’s also been used to describe our troops, for those who have and still offer themselves to save others.

There are many pictures which tell the stories of those who have given the ultimate sacrifice, to save their brothers, strangers, nations.  Some pictures are in black and white and too many of those who are the stories are no longer here to speak. But their pictures still do.

Imagine a dull gray sky, steel blue frigid water, sandy beach, cold wind blowing. The hills alive with enemy gunfire, waves of men steadily gaining more and more ground as their brothers fall around and under them.  The steady artillery, the constant blasts, the moans of those fallen,  screams of those pushing on.

On now to a quiet hill, sparse grass among the rocks and sand, the only sound now is the wind echoing the marching feet of those who moved on a couple of days ago.  The sky is overcast, but a ray of light breaks through the clouds and touches on a gun which has been placed upright between some rocks. A memorial made; final and hasty goodbyes 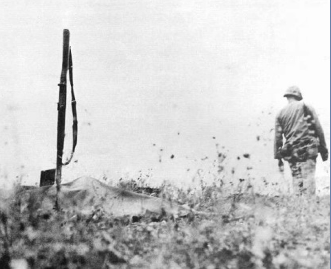 said before the living continue on.

The memorial which was quickly made, yet significant to those who erected it is long gone, as are the echoes of those who fought on beaches and in fields, cities, towns and villages across Europe, and have been replaced by stone markers and crosses. There are 24 American cemeteries maintained overseas with 125,000 graves of our fallen and additional memorials for 94,000 Americans who were lost at sea, or their remains never recovered. The people over there, even those who were not yet born, still remember the men that came and sacrificed themselves and liberated their countrymen. They are still remembered, still honored, still cherished every year- but are

Picture 19 ghostlike men vigilantly patrolling a silent landscape of vivid green Juniper bushes, their faces reflected in polished black granite. Each branch of the US Armed Forces is represented here.  All of them are dressed in full combat gear, fourteen from the U.S. Army, three from the Marine Corps, one a Navy Corpsman, and one Air Force Airman.
54,246 US troops gave their lives for people they didn’t know, in a land they’d never heard of.  103,284 were wounded, 7,140 were captured and the current number defined as Missing in Action, 664.

The memorial for the “Forgotten War” was dedicated on July 27, 1995 which was the 42nd Anniversary of the armistice that ended the Korean War.

Back before the Vietnam War, it seems that America still held real values, duty, honor and courage. Not just our troops, but most Americans displayed the same, because those who had fought in places like Guadalcanal, Iwo Jima, Germany, Italy, France, and North Africa were respected and honored. They marched in parades, raised the flag every morning, and lowered it with utmost respect every evening at sundown.  These men were given honor for saving, liberating hundreds of thousands and fighting a well-defined evil.  Their sons and grandsons who went to Vietnam were fighting an enemy who looked like the people they were trying to help and who used children laden with grenades.

The next picture stirs numerous emotions, even though like the previous wars, it began before I was born, yet ended when I was a little girl. Faded red and blue, stars reflected, the names of men I’ll never know, yet are known, cherished and remembered by others. The reflections of three servicemen- brothers in arms in a war far away in the midst of unrest in the United States as troops came home to hateful names and outrage.  The faces of so many, haunted by

memories inconceivable to the average person back home, and the phrase soldier’s eyes comes to mind.  The eyes are the window to the soul, and their souls are wounded.

I see the same wounded souls from photos of our troops in wars during my generation- Beirut, the Persian Gulf, Iraq, and Afghanistan.

Our society has changed, but the hearts and souls of those born warriors are the same as they have been throughout our nation’s history.  They still consider Honor, Duty and Courage and have a love for something bigger than themselves. 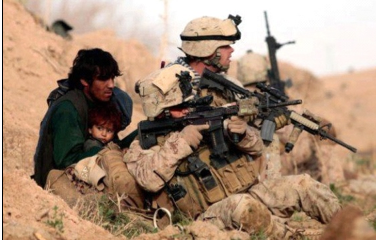 Where are the days of solemn reminders of what so many gave- that we have a long weekend to celebrate in May? Is it too much to ask that people take time to go visit a memorial instead of hitting the mall for sales?  One day a year is set aside on the calendar to remember those who gave all, yet too often is that day associated with fun, bargains, ball games and barbeques.

On Memorial Day especially, we can find the living among the dead- those who returned, who remember those who did not.  Please America, remember those who are gone, respect one day at least, and give thought to the prices paid for Freedom- and maybe, if you happen to pass a service on your way to the beach, or ballgame, stop.  Go and pay honor, thank a Veteran, show him in words that you are grateful and that you still care.

SC Gov. Nikki Haley Calls on Pastors to Join Her for Fasting & Prayer

Memorial Day and Beyond, Their Spirits Live On