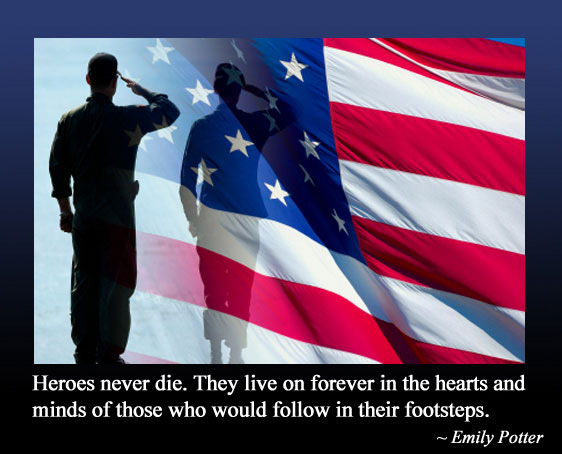 “Never in the field of human conflict was so much owed by so many to so few.” ~ Winston Churchill

How does one put into words what the heart says? Staring at an empty page as I often do, I’m wondering how to put the same hopes into new words without simply repeating an old message. Hoping that no matter how many years go by; people will learn or see with a new perspective how important sacrifice is, and how so much has been given by so few from all generations for all generations.

Oftentimes I listen to music to clear my mind or gain inspiration. Right now I’m listening to Brothers in Arms by the band Dire Straits. While singer Mark Knopfler wrote the song about the Falklands War which was going on at the time, it’s not really a war protest song. It’s more about Brotherhood and Loyalty, which have always been poignant realities of war.

Throughout history brothers sacrificed themselves so that others can return home from war and fellow soldiers have been able to come home because their loyal brothers wouldn’t leave them behind.

Most of those who have served in our military are modest about their service. I am always humbled and grateful by the reminder that there are so many who continue to show selflessness in a selfish “me” oriented world. Many of them are home and no longer wearing a uniform, yet they will never forget their brothers in arms. To them, the true heroes are those who never made it home.

Brotherhood and loyalty span generations of warriors as the last stanza in the poem In Flanders Fields tells us. The poem was written during World War One by Canadian military doctor and artillery commander Major John McCrae.

To you from failing hands we throw

the torch; be yours to hold it high.

If ye break faith with us who die

we shall not sleep, though poppies grow

Those who fight in our time, carry on the freedom torch which was fought for by their brothers, long since buried. All who have fought and died still carry on in the spirit of those who are still fighting, and in those who have hung up their uniforms who remember their fallen brothers.

In our troops and Veterans, I see freedom. In them, I see the spirit of the patriots I learned about in history books. Because of them, I am able to learn about their brothers in arms who are no longer alive except in memories. The men and women who have and still serve our military are willing to sacrifice their freedom so the rest of us can have it, and I will always be so incredibly grateful for that.

Sometimes just saying the word gratitude isn’t enough though. A disturbing trend began before I was born, and sadly continues still today. Those who came home then and who still come home are often forgotten about. While remembered on Memorial Day and maybe even Veteran’s Day, they are forgotten once the sales, ballgames, barbeques and parades are over and the flag folded up until the next year rolls around again.

Memorial Day is one day out of the year when Americans can reflect and remember sacrifice. The names of thousands are on the minds of family who loved them, friends who miss them and Veterans who will never forget.

For so many who have the soldiers’ spirit, every day is a memory, a Memorial Day; they will never forget their brothers who never made it home whether they fought side by side or across generations.

They deserve to be remembered because without them, without all who have and still fight, our world would be a much more hostile place. Those who fight are the ones who pray hardest for peace and who have seen what our world would be like if the weak were left with no one to defend and liberate them. I can’t ignore or forget such sacrifices and I write in hopes that others won’t either.

The music I’ve been listening to while writing has continued on quietly in the background. The song playing right now is I Just Came Back from a War by Darryl Worley.

“If I’m not exactly the same good old boy that you ran around with before, I just came back from a war.”

Good old boys have been going off to war throughout history and those who return come back as men. Within the last 40 years or so, they have come home to a nation who ignores them, forgets them or worse, blame them.

Darryl’s song echoes the same perspective I hope people think about:  “I hope you cherish this sweet way of life, And I hope you know that it comes with a price.”

Those prices have names. We may not have known them but it’s time we all remember them. Memorial Day is coming up in a few days. This the time to start, and then maybe someday more of us will remember and be grateful on other days of the year too.

(VIDEO) Honoring Those Who Have Fallen: Memorial Day Prisoner of War Ceremony