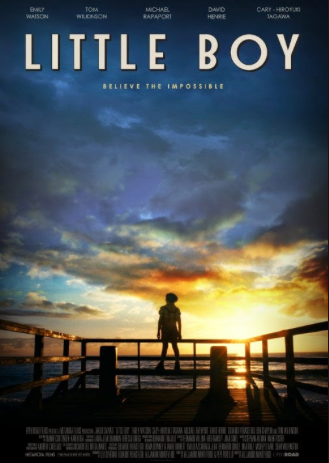 “Do you believe we can do this?” “Yes!” is the theme of the newly released faith based film “Little Boy.”  From executive producers Roma Downey and husband Mark Burnett (“The Bible”, “Son of God” and “A.D.”), “Little Boy” is the story of Pepper Flynt Busbee (nicknamed “Little Boy” due to his height) and the strong bond he has with his father who goes off to fight in World War II.

After a live show with a magician where Pepper (Little Boy) is convinced he has super powers, Pepper decides to use his gift to end the war and bring his father back. The local priest, Fr. Oliver (actor Tom Wilkinson) tells Pepper his faith in his powers will be stronger if he fulfills an ancient list of 6 compassionate acts that includes, “Feed the hungry, shelter the homeless, visit the sick, etc.”. As Pepper goes on his way to fulfill the list, he befriends a local man, Hashimoto (actor Cary-Hiroyuki Tagawa) who the town berates because he is Japanese. Along with Fr. Oliver, Hashimoto and the love and support of his mother (actress Emily Watson), Peppers faith in his abilities guides him to move mountains (literally) and use his belief in his powers to end the war to bring his father home.

The film “Little Boy” is a powerful testament of faith and has already proven to be controversial to the Hollywood elite as it’s message rattles their usual cinematic cynicism in Christian belief.