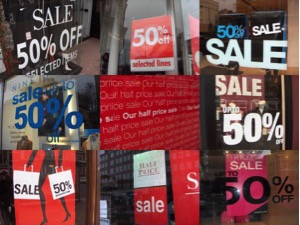 Imagine going to the stores before Christmas and finding that there are no sales. Or how about those of us who do our shopping in the days AFTER Christmas when the deepest discounts are often found, only those sales are outlawed. In the USA, it is a common theme for retail stores to find something…anything, to promote a sale. Back to School, Easter, Halloween, Christmas, New Year, St. Patrick’s Day, Mother’s Day, Father’s Day, March Madness, Spring, Fall, Winter, and everything in-between. However, for one European country, it has been decided that such deals are not to be found more than twice a year. In addition, those sales can only run for a maximum of six weeks.

What could possibly explain legislators deciding to ban something as simple as a sale? It seems that back in 2008, when the center right government under Sarkozy moved to stimulate the economy by encouraging French people to shop at stores…they suggested promotional sales. However, in 2012, the Credoc research center and the French Institute of Fashion said these sales benefitted big retailer’s more than smaller stores. This unfair market advantage could not be allowed to continue.

Not surprisingly, at the time, the commerce minister in France was Sylvia Pinel from the Radical Left Party. (That is the actual name of the Party and not an attempt to paint Pinel in any particular political stereotype.) As a result of the Radical Left Party’s position on sales, the French legislation has passed a law that now bans retail sales from occurring more than twice a year and limits them to six weeks or less.

Many may say this is nothing for Americans to be concerned with as it’s in France and not in America. What needs to be pointed out is that our current government has shown an intense interest in following in the same practices used across Europe. Frequently we are told that the healthcare system in Europe is something America should seek to replicate. It is not hard to imagine that our current administration would follow along with the social justice advocated in this position and recommend a similar law. Knowledge is power and a lack of knowledge is weakness.

Libertarian Nat’l Chair to GOP: “Get out of the Libertarian Party’s way”