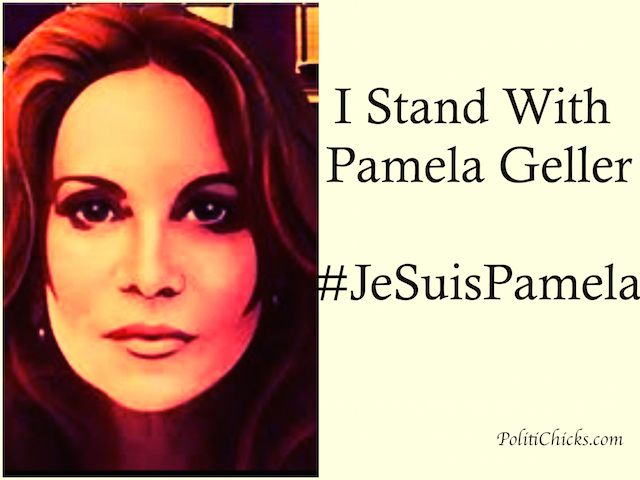 The media frenzy has moved on from debating the wisdom of Pamela Geller’s event, The Muhammad Art Exhibit and Cartoon Contest, held at the Curtis Culwell Center in Garland, Texas on May 4th.

The media circus included the left and right talking heads, many on the right sounding more like the political left. Except for a few of the deeper thinkers, Geller was labeled a taunter and provocateur.

As a nation, we have been lulled into conformity by the new left’s effort of an internal take-over of America. And the first course of action in taking over any nation is to use intimidation to silence dissent.

The once successful move of political correctness is now building defiance in the hearts of many Americans who have had enough. Visit any patriot’s Facebook page and you’ll see evidence of the freedom movement.

Yet the political enemies of our Constitution have fostered and emboldened a greater enemy of our freedoms such as the two would-be resident jihadists who took the censorship effort to the next level by opening fire on those attending Geller’s event.

Regardless, free speech had its way. A national debate ensued centering on the parameters of freedom of speech. While most of us were not surprised by the left leaning media who no longer employs journalists but rather radical democrat activists, we were astounded by such Fox favorites as Bill O’Reilly, Greta Van Susteren and Gretchen Carlson who mercilessly admonished Geller for provoking the jihadists. How ironic that those who shape our thought processes and values could be so impervious and shallow in why and for what reason freedom of speech was given Constitutional ascendancy.

It took deeper intellects to give language to the free speech principle.

“. . . there is a special kind of exercise of free speech here: speech as defiance. The organizers are sending a message that they are not afraid, either of those who would condemn us or even of those who would kill us — at least not so afraid that they will forgo their First Amendment rights.”

“What happened in Germany in the 1930s and ’40s is happening in America today, except the assault on our system is not coming from Nazism, but rather from radical Islam. The mullahs in Iran and their surrogates around the world stand at podiums and declare boldly: Death to America, Death to Israel! They tell us outright that their goal is to create a caliphate in which Sharia law is the law of the land, in which all infidels – anyone who does not practice or has not converted to Islam – are relegated to second-class citizenship, draconian taxes, and groveling servitude, if not outright enslavement. Some of our own elected officials echo their words. All of them, like Hitler, rely on apologists who flagrantly lie about this escalating threat. Shame on them!”

The Fox News host, Megyn Kelly boldly and elegantly defended freedom of speech, asserting that one does not have to support the organizer of the cartoon contest to support the right to host it.

“The bottom line here is that some in this country have been so busy trying to figure out how to avoided causing any religion any offense they have forgotten what is offensive to Americans: those who would trample on our core ideals,” Kelly said. “In America we stand for liberty and freedom to offend, to provoke, to persuade and to defy.”

I stand with Pamela Geller. The more offensive the speech, the more protection it will need. Freedom of speech is non-negotiable with few exceptions because with it accompanies our freedom of religion, freedom of press and freedom of associations. While one cannot indiscriminately yell “fire” in a public facility, let us not forget that the Supreme Court ruled in favor of the repugnant Westboro Baptist Church ruling that Americans are to tolerate even hateful speech.

Hypocrisy, Thy Name is Obama.

Video Proof of Hillary Clinton and Her Elitism