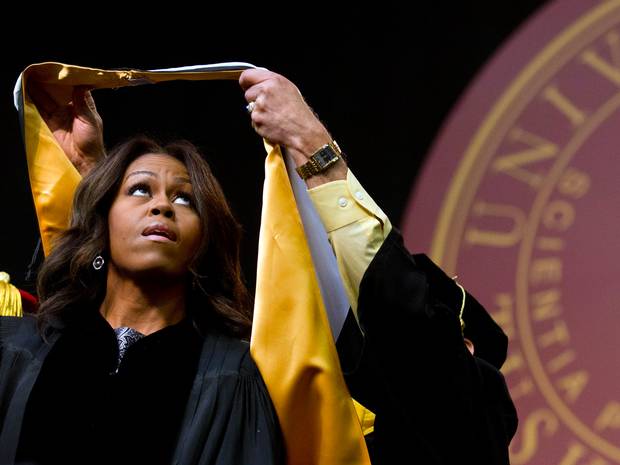 Last weekend our First Lady spoke in Alabama to the newest grads from Tuskegee University. The racial breakdown of students attending Tuskegee is overwhelmingly Black with a small percentage of Asian, White, and Other (as they are labeled on the entrance application for this southern university).

Of course the topic of Michelle’s speech was her most favorite subject: racism.

The pathetic sentiment she projected to the new grads was not one of inspiration and hope for their fine future; instead it was her worn out refrain of ‘poor me, I am black and people are racists.’

Yes, this was said by the same Michelle Obama who is currently being waited on hand and foot in the White House…

Michelle Malkin wrote about the speech with a scathingly correct assessment:

Commencement FLOTUS is not the same first lady who shows up on Ellen or The Tonight Show Starring Jimmy Fallon wearing her pastel cardigan, Chuck Taylors and a megawatt grin. No, this frowny-faced Michelle Obama talks and squawks like Al Sharpton in Jimmy Choo kitten heels. At Tuskegee, FLOTUS traded her affable TV persona for the divisive social justice complainer we all came to know and loathe during her husband’s first presidential campaign.

Malkin went on to say,

Does the FLOTUS really think an auditorium of elated grads wants to hear her bemoan about how she was picked on during the campaign trail? She complained that there were two sets of standards for candidate’s wives: One set for all of the other women and one for her. She moaned that the media made insensitive remarks about her and grumbled that she and her husband have felt the “sting of slights” throughout their entire life.  (Oh for goodness sakes who hasn’t…)

Michelle Obama’s true colors are showing and although she tries to disguise her words, her hatred runs too deep. She says she now looks back and realizes the negativity around her is “just noise.”  She is a Princeton graduate–do we really have to explain to her that the “noise” she hears represents the American public’s disgust over her behavior and it has nothing to do with her skin color?  Did she not get the memo?  Michelle’s husband holds the highest office available to anyone in the United States; there is no greater position of power on earth and thanks to American taxpayers, she is benefitting from all those presidential perks as well.  So should we maybe tell her that her husband, who was elected President of the United States TWICE, is black?  It is time to put the race card away!

Our First Lady’s behavior towards race is uncomfortably telling on her part, especially as the years unfold and her position of power, fame, and acceptance has not softened her own heart nor has she become any more self-aware. Unfortunately for her–and those having to listen to her–it is painfully obvious that while she is scolding others for racism she is actually projecting her own.

Being married to the President is a position of influence that takes a back seat to none. As Mrs. Obama looked out over a sea of beautiful young faces she could have given them an affirmation of their future. She could have told them how wonderful it must be to graduate in 2015 when skin color is no longer an obstacle to overcome. The President’s wife could have told these impressionable young adults that even though racist individuals will always walk amongst us, the days of overwhelming bigotry are long past.  She could have mentioned how far America has progressed, that despite living in a nation where black people used to be slaves, today the color of a man’s skin did not prevent him from becoming President.

Unfortunately she did not, and she’s on a roll.  A few weeks prior to her commencement speech in Alabama the First Lady was telling high school students in Topeka, Kansas in to monitor their immediate families, friends and co-workers for racism.

First lady Michelle Obama is encouraging students to monitor their older relatives, friends and co-workers for any racially insensitive comments they might make, and to challenge those comments whenever they’re made..Obama said students need to police family and friends because federal laws can only go so far in stopping racism.

“[O]ur laws may no longer separate us based on our skin color, but nothing in the Constitution says we have to eat together in the lunchroom, or live together in the same neighborhoods,” she said. “There’s no court case against believing in stereotypes or thinking that certain kinds of hateful jokes or comments are funny.”

To address these limitations in the law, Obama asked students to take steps to “drag my generation and your grandparents’ generation along with you” in the fight against racism.

“Maybe that starts simply in your own family, when grandpa tells that off-colored joke at Thanksgiving, or you’ve got an aunt [that] talks about ‘those people,’” she said. “Well, you can politely inform them that they’re talking about your friends.”

Thankfully there are no laws telling people what to think; we’ll leave that to Hitler’s regime.  But I am embarrassed for the First Lady as she continues to whine year after year out about how she is slighted because she is black. It defies intelligence to see this middle aged woman, literally living in the lap of luxury, who is so angry at the world because of the color of her own skin.  And in her commencement speech, what was completely lost in her finely honed words was any message of hope, achievement, or graciousness for the country where freedom makes it possible to succeed–no matter what color you are.