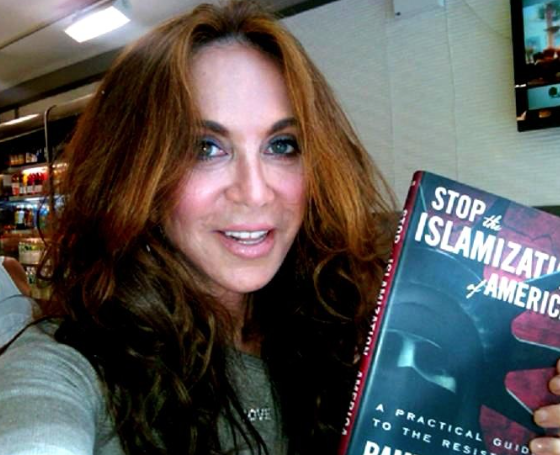 After the recent Garland shooting, I shared these thoughts on my Facebook page…and I received “likes” from Democrats, Independents and Republicans who respect the Constitution and value their freedom.

“I stand with Pamela Geller!”

If you find that statement “offensive”, there are several non-violent options at your disposal. You can, for example, unfriend me, block me, ignore me or write a nasty blog post about me. It would be unacceptable (and quite illegal), however, to shoot me, behead me, stone me, mutilate me, blow me up or pour acid on my face. If your “religion” compels you to respond to an “offensive” drawing by murdering innocent people with whom you disagree, it’s not really much of a religion, is it?

Of course, our pandering President says that ISIS, Al Qaeda, Boko Haram and other “extremist” groups do not represent Islam. If that is the case, Pamela Geller didn’t “incite” Muslims by holding an “Islamophobic” (sic) free speech event and art contest in response to the Paris massacre. She “incited” idiots…but, as we all know, those same idiots will always find a reason to be offended. Gay people offend them. Women offend them. Jews offend them. Even non-halal free meals provided by the US taxpayers offend them! Make no mistake…if it’s not a cartoon, it will be something else.

At what point will we as a nation stop letting these not-really-Muslim “extremists” and their “progressive” enablers extort us into abandoning our Constitutional rights? We still have free speech here. If that speech offends any “lone wolves”, “disturbed individuals”, “disgruntled workers” or “extremists”, the blame for any resulting violence should be placed squarely on the perpetrators and their warped sense of “justice.”

There is a silver lining to all this nonsense, however. Two devout terrorists won’t be killing any Americans in the future. They’re dead…and they’re dead because a good guy had a gun. Their violent assault on the 1st Amendment made a great case for the 2nd and their deaths shot a giant hole in Michael Moore’s argument that police should be “disarmed immediately.” Moreover, as progressive politicians, Leftist activists and MSNBC talking heads are calling for limitations on free speech, they are exposing themselves to the nation as morons. Conservatives already knew this but some folks who might not have been paying attention before Garland now do as well.

Pamela Geller has been exposing radical Islam for years…and I applaud her for her efforts. Unfortunately, she has been consistently demonized by lots of really “smart” people on both sides of the political aisle. I expect progressives and jihadists to do this…it’s what they do…but I’m saddened that certain “Republicans” feel compelled to distance themselves both from the truth and from the Constitution. Pamela Geller is not the problem. Cartoonists are not the problem. Free speech conferences are not the problem. Radical Islam is the problem…and “progressivism” and “political correctness” make that problem worse, not better.

The scourge of radical Islam won’t go away if people would only stop drawing pictures. Wake up America!!!

John LaRosa is the co-founder partner of FourTier Strategies, LLC and JSL Consulting.

Daniel Greenfield: Cartoonists are Controversial and Murderers are Moderate