David Merrill, a man with a history of abuse and fraud charges claims to have acquired the Colorado landmark known as Bishop Castle. The contested owner and castle builder, Jim Bishop—known for his eccentric political views—is fighting an aggressive and rare form of cancer as his wife Phoebe recovers from breast cancer. Phoebe told PolitiChicks in a phone interview that they had signed a trustee agreement, but did not sign over ownership. She also said that she felt pressured to sign the papers naming Merrill as trustee. Phoebe is Jim’s primary caregiver as the cancer has left him in a severely weakened condition.

Family and friends say that Jim wants the castle to maintain its status as a gift to the community to enjoy free of charge, not as a part of one man’s religious or political agenda. They believe that Merrill is taking advantage of Jim. “This was never his intention.” Julian Van Dyke of Rye, Colorado told Politichicks regarding the title dispute. “Jim Bishop has sat at my table many times and told me what he wanted. He always made it clear it would be in a trust for the people, not an individual.”

Van Dyke’s account is corroborated in a 2013 Youtube video (6:58 minute mark) in which Jim Bishop told visitors about his plan for projects around the castle, “Get everything started so my kids and grandkids can take over when I’m not around anymore.” A 2006 article from the Pittsburgh Post-Gazette made this statement based on a phone interview with Bishop: “After he’s gone, Mr. Bishop hopes his castle will live on, and that his children and grandchildren will pick up where he leaves off, offering tours and continuing to make the castle a tourist destination.”

Acknowledging Jim’s well known anti-government rants at the castle, Van Dyke said, “Jim is the way he is, but a good guy. He’s compassionate, honest, and loves people. He’s a bit of an eccentric, but he’s a good friend.”

The family has released a video of Jim Bishop responding to Merrill’s claims.

Who is David Merrill?

A background check with the Colorado Bureau of Investigation (CBI) revealed a temporary restraining order against Merrill—born David Merrill Van Pelt—and an assault charge on an at-risk individual. However, the restraining order was vacated and the assault charge dismissed. Merrill allegedly assaulted his mother, the late Louanne Van Pelt who was known as the inspiration for the character of Lucy in the famous Peanuts cartoon strip. The CBI check also produced information on a judgement against him in favor of Colorado National Bank.

Sovereign citizens are known to sign official documents with their thumbprints as Merrill did with a recent court filing on Bishop Castle—or Castle Church for the Redemption of the Office BISHOP, as it is now called. 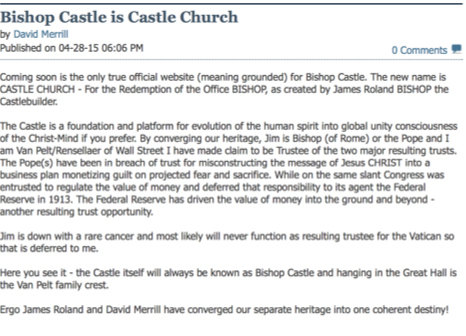 bulletin board forum called the Savings to Suitors Club. In a post dated April 28th, 2015, Merrill appears to claim that Jim Bishop is the pope of Rome while referring to himself as the “Van Pelt/Rensellaer of Wall Street.” 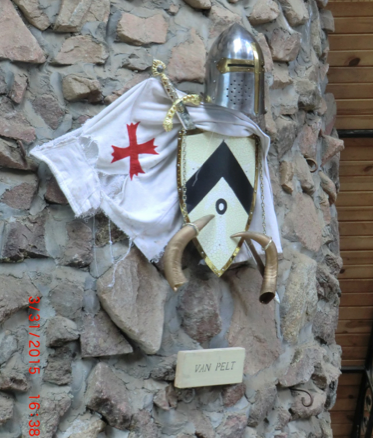 Previous posts in the Savings to Suitors Club include these statements:

Merrill has also posted in other forums including suisjurisforum.com and ronpaulforums.com:

The Bishop’s eldest daughter confirmed that despite the claim of acquisition as September 11th, 2001 and the December 2014 post inviting people to affiliate with the Castle Church, the deed was signed as notarized on February 9th, 2015.

Merrill’s reference to the gospel of pragmatism is a 40-page treatise he wrote that mingles a DiVinci Code style of Christianity with a splash of anti-government conspiracy theories. The treatise also mentions the Bishop Castle builder: “Jim BISHOP – James Roland BISHOP agrees fully with Pragmatism and declares it proper to release copies from Bishop Castle where adoption of Pragmatism makes the Castle and entire premises Mandatory Exception pursuant to Internal Revenue Code, redeeming lawful money in all instances.

However, Phoebe Bishop disputes this acceptance of Merrill’s gospel of pragmatism and stated that neither she nor her husband consider themselves religious. 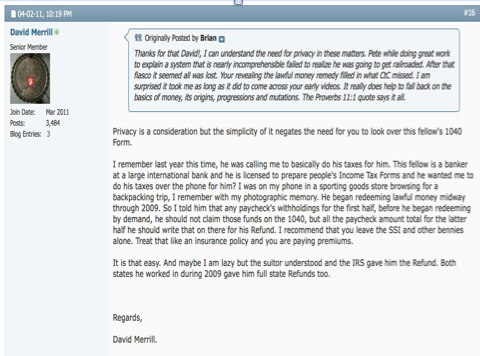 Sovereign Citizens: Who are they?

A 2014 report on a survey of law enforcement found that sovereign citizens were considered the number one terrorist threat by its respondents.

“One prevalent sovereign-citizen theory is the Redemption Theory, which claims the U.S. government went bankrupt when it abandoned the gold standard basis for currency in 1933 and began using citizens as collateral in trade agreements with foreign governments.”

Members of the movement range from nuisances to the court system who file frivolous lawsuits, con artists who prey on people who embrace the ideology, and true believers who resort to violence against a government system they believe to be illegitimate. A University of North Carolina School of Government paper states, “At their most harmless, sovereign citizens are cranks who talk what seems like gibberish to cops and magistrates and judges and then become law abiding when they face real legal trouble. At a different level, they may burden the courts severely with the filing of hundreds and hundreds of pages of nonsensical documents. And at their very worst, they may resort to deadly force to defend their strange beliefs.” While resorting to violence is rare, sovereign citizens are known to engage in “paper warfare” where they file complaints and liens against the property of their perceived enemies, resulting in what can be a costly and time-consuming mess for their victims.

In addition to claiming ownership of Bishop Castle, Merrill has also filed a complaint against Shelly Beierle who runs the Bishop Castle Gift Shop. Linda Urwiller, Clerk of the Court of Custer County, confirmed that Merrill submitted a “complaint of slander/coercion, assault, and interloping” against Beierle, who leases the gift shop on private property owned by the Bishops.

Beierle told PolitiChicks that she feels Merrill is bullying her because she supports the Bishop family and is not afraid to speak her mind. When asked about the complaint, Beierle said, “All I’ve done is exercise my freedom of speech. I told him that he needs to stay away from me because he’s a scumbucket.” Regarding the assault allegation, Beirle stated that no physical contact occurred. She said that the complaint referenced Merrill feeling threatened by a few young men—whom she had never met—confronting him about his claim of ownership.

Valerie Bishop Moore provided this statement: “David Merrill not only took advantage of my parents whom are both ill and elderly but he took advantage of my siblings and myself. Each of us have families of our own with all the responsibilities that go along with it. We are a part of the castle as much as we can be but I think David Merrill felt we didn’t care or want to be a part of it because we were not there when he was. We are a typical family with all the normal dysfunctions. But each and every one of us are and will always be a part of Bishop Castle.”

Harvard: Younger Voters Are Moving Toward GOP for 2016