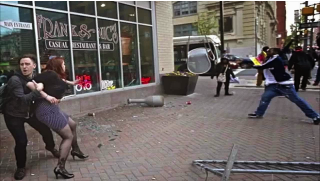 The stores with smashed windows aren’t the means to express outrage, but the end. The purpose of criminality is criminality. The police exist so that stores can remain unrobbed and random pedestrians can remain unbeaten. The protests express opposition to that policy by robbing stores and assaulting random white people.

The police were never the problem. The looters and rioters were.

The counterculture has not changed dramatically since the 70’s, but it has tossed aside any appearance of idealism. The new counterculture draws in two groups, disaffected upper middle class white youth and lower class black youth. Their goals are purely materialistic, looted iPods and government subsidies for housing, education and anything else they can think of.

These are the children of the welfare state with little in common except a rejection of the commercial way of life. Neither the entitled white university brat or the posturing ghetto teenager has any interest in working. The businesses they smash are an alien thing to them. Small businessmen do not go about smashing stores. The people who do think of commodities as something they trick or intimidate others into giving to them. And that covers everyone from municipal unions to thugs driving around BMW’s.

This lawless materialism is the essence of the welfare state. “Loot as much as you can, or someone else will.” If you don’t grab government benefits or sneakers in store windows, someone else will. The rich are grabbing, the pols are grabbing– time to queue up and loot your share. Communism made this way of thinking so commonplace that all of Russia became one black market. And we are not far behind.

What kind of people behave this way? Those who have come to think of wealth as an infinite pile from which everyone grabs as much as they can. This is where the ethos of the socialist left and hip-hop comes together. Obama gleefully spending millions on himself and trillions on national giveaways for his donors and supporters is the most obnoxious fusion of this phenomenon.

The angry rioter is a sacred figure in the progressive pantheon of social justice. The shirtless men in bandanas carting away cell phones are so outraged by injustice that they are willing to take to the streets and do what progressive hipsters taking social justice selfies of themselves in souvenir t-shirts plastered with the face of the latest victim of “white supremacism” can only dream about.

The race riot isn’t a bubbling stew of outrage out of which wounded souls emerge to cry out for justice. It’s a complicated criminal conspiracy in which the perpetrators rarely suffer any consequences. 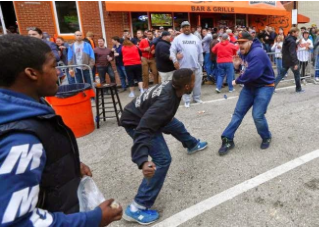 The rest are there to get some attention while providing them with protective coloration. 9 out of 10 people screaming frenziedly while holding up “Black Lives Matter” signs would eagerly scream and hold up “Justin Bieber 4 President” or “Baltimore Loves the KKK” signs if it got them positive attention and a shot at being on television.

Technological savvy melded with barbaric behavior, the 21st century mobile devotee turned raider is a wake up call in more ways than one. These are not mere race riots, they are the self-organization of the end of our civilization.

The classic raid has come to the cities of West, its hallmarks are not frustration but careful planning, followed by a violent rush. They are the reemergence of an old way of life that most people think died with the Vikings.

The law banished the raider back into the dim pages of history, but law depended on a civilization which is now collapsing. Police officers need the support of the public to hold the line. And the left has now openly reverted to its pro-criminal advocacy while elements of the right, particularly those funded by the Koch Brothers, advocate for criminals.

The traditional raider saw himself as part of an outside group. The modern raider has global identities that are at odds with the country he lives in. When he joins a raiding party, it is as a member of one of those groups looting a society whose welfare is of no interest to him.

The left’s motives for rebelling are different than those of minority looters. But the end result is similar enough. A disregard for the civilization becomes a disregard for its laws. And that leaves self-interest as the only hedge against anarchy. But what interest do people who do not work for a living have in preserving the businesses of others? None at all. As far as they are concerned, smash a store, it will collect the insurance, and reopen, or another will open up in its place. And even if it doesn’t, then so what? It’s not “our businesses” anyway.

The commercial tribalism of the rapper who conflates casual violence and criminality with honor follows a pattern of glorifying crime that predates and postdates race, its ubiquity dating back centuries, from the highwayman to the 1920’s bank robber, and is almost as socially disruptive and even more contagious.

The narrative is the same. Its idealism and honor covers up the blatant materialism and greed that its lawbreaking enables. And the message is also the same. Civilization’s end.

The return of the raider as an instant message enabled gang is a phenomenon at odds with progress. It is a warning that darker times are returning, that while everyone may pack phones that have more processing power in one inch than a room of computers did 30 years ago, the march of progress is moving backward. 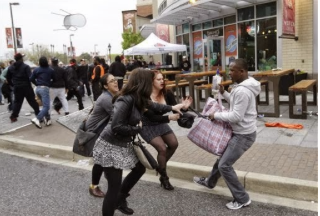 The #BlackLivesMatter riots are the product of a new generation of Sharptons, ambitious activists feeding hate, of the New Black Panther Party’s obsession with becoming relevant, of the ragged hipster ends of Occupy Wall Street drifting from occupation to occupation, of Muslim agents dreaming of turning African-Americans into a fifth column and of Obama’s clumsy efforts to keep on playing community organizer by feeding racial grievances and then pretending to rise above them.

Those who gain from unleashing chaos and violence are not the powerless, but the powerful. Sharpton rose to his important role as Obama’s liaison on a trail of bodies. Someone operating here hopes to be the next Sharpton. Meanwhile Obama is playing a perverse fusion of Sharpton and MLK, amping up a bad situation and then telling blacks and whites that they need to rise above it.

As always, the ringleader tries to keep his hands clean while convincing the establishment that he can turn the violence on or off any time he wants to.

Obama exploits the riots he cultivated for his own political ends. The looter at the top is not through looting yet.

Kindness, Civility and Consideration: Not Just for Southerners