When two terrorists in body armor and carrying assault rifles came for a roomful of cartoonists and fans of freedom of speech in Texas, the media took the side of the terrorists. 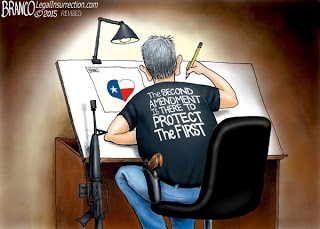 CAIR, a Muslim Brotherhood front group with ties to terrorists, spun the attack by claiming that the contest had been intended to “bait” the terrorists. The media quickly picked up the “bait” meme.

The New York Times, the Atlanta Journal Constitution, the Dallas Morning News, CNN and even FOX News all accused the cartoonists of “baiting” the poor Muslim terrorists into attacking them. The actual attempt at mass slaughter was dismissed as the terrorists “taking the bait” from the cartoonists who had been fiendishly plotting to be mass slaughtered by them for the publicity.

The Washington Post not only stated that the contest was “bait”, but its headline huffed, “Event organizer offers no apology after thwarted attack in Texas.” And why won’t the 9/11 dead apologize?

Journalists often tell us that a free press is the best defense for a free society. Every major newspaper and news network once again proved them wrong. The best defense for freedom of speech came not from the journalists or the civil rights groups, from the speechmakers or the activists. It came from an off-duty traffic cop working security outside the event targeted by Muslim terrorists. His partner, an older guard, didn’t even have a gun, and took a bullet to the leg.

He could have pulled back and let the terrorists have a clear path. No doubt he had a family and plenty of reasons to live. Like so much of the media, he could have disguised this cowardice by blaming the cartoonists for bringing the attack on themselves. Instead he held the line. The traffic cop with a pistol took on two terrorists in body armor, armed with assault rifles and extra ammo. And when it was over, two Muslim terrorists were dead and freedom of speech was alive.

“He had two people shooting at him, plus he’s trying to take out two targets. And if he had to make headshots,” Mark Sligar, a firearms instructor, said, “That’s awesome shooting. And look at the people’s lives he saved, just because he was able to take care of that.”

Like Kevin Vickers, the retired 58-year-old Sergeant-at-Arms, who armed with a 9mm handgun stopped Muslim terrorist Zehaf-Bibeau from carrying out a massacre of Canadian parliamentarians, the unnamed older police officer did more to protect freedom than all the self-styled defenders of freedom ever have.

And he did it with the tool that many of those defenders of freedom want to outlaw; a gun.

The left promises us collective security through civil rights while taking away our freedom. Their idea of collective security is disarming the citizenry, then disarming the police and then appeasing the killers. There will be more murders than ever, but at least those carrying them out will be representatives of oppressed groups, such as inner city drug dealers and ISIS terrorists, ‘punching up’ at the privileged.

We’ve already seen how worthless collective security is. In Baltimore, the Democratic mayor turned over the city to rioters and looters. Every Democrat who was at all involved in fighting crime, from Bill Clinton on down, is frantically apologizing to the social justice mobs for daring to protect Americans. The media is busy explaining why the looters were right and the lootees were in the wrong.

After the Texas shootings, the media popped up to blame the attacks, not on the attackers, but on those who came under attack. CAIR’s “bait” meme, adopted by the media, reverses responsibility. It contends that anyone shot at by a Muslim terrorist has to prove that he didn’t intend to provoke the terrorists. 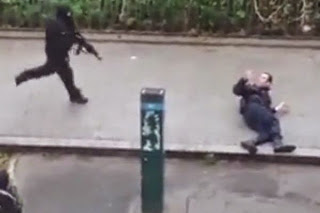 Despite the impeccable left-wing credentials of Charlie Hebdo, the PEN gala came under fire from authors denouncing the French cartoonists for provoking their disenfranchised and oppressed minority ISIS killers. And when the ISIS killers came for the Hebdo cartoonists, unarmed police officers ran for it.

A wounded French cop raised his hands and begged for his life, before the terrorist finished him off with a shot to the head. It’s not the first time that a disarmed West has been helpless in the face of Muslim terrorism.

During the Munich Olympics, German police provided security by handing out candy and flowers. An informant had passed along word that an attack was being planned, but nothing was done. The resulting massacre of Israeli athletes by Muslim terrorists was partially covered up by the German government which released three of the captured terrorists a month later and whose foreign minister met with the planners of the massacre to “rebuild trust”.

Just like Argentina and Iran, after the bombing of the Jewish community center in Buenos Aires, a dirty deal was struck behind the scenes and the terrorists got what they wanted.

When Israel independently targeted the terrorists, the German ambassador to Lebanon blasted Israel for killing the most “rational and responsible” members of the PLO.

The Israelis had killed the terrorists, he accused, because they did not want peace.

But a bunch of good guys with guns had settled the issue of whether Israeli athletes should be able to compete in the Olympics even though the UN Security Council passed a resolution condemning the Israeli “act of aggression” and the “loss of human life”; particularly that of terrorist boss Abu Jihad.

The accusations are all familiar. Bosch Fawstin, Charb, Pamela Geller, Theo van Gogh, Mark Basseley Youssef, Salman Rushdie, Molly Norris and a hundred others are at fault for provoking the terrorists.

There are lectures on “responsible speech”. The targets are accused of “hiding” behind freedom of speech and of deliberately planning to be killed for the publicity.

During WW2, Gandhi urged the Jews and the British to surrender to the Nazis.

“This manslaughter must be stopped. You are losing; if you persist, it will only result in greater bloodshed. Hitler is not a bad man. If you call it off today, he will follow suit,” he whined to the Brits.

“I want you to fight Nazis without arms or… with non-violent arms. I would like you to lay down the arms you have as being useless for saving you or humanity,” he suggested in another missive.

He also had some advice for the Jews. “If only the Jews of Germany had the good sense to offer their throats willingly to the Nazi butchers’ knives,” he mused.

That is where the insane mantra of non-violence and appeasement, the exploration of root causes and winning hearts finally leads, to mass graves and victorious mass murderers.

And everyone who refuses to take their suicidal advice is blamed for provoking the killers. 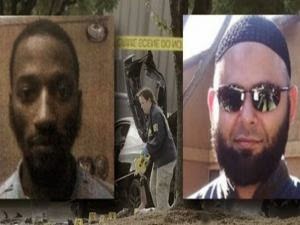 We can either live in a paranoid politically correct world frantically trying not to offend the Hitlers
and Mohammeds, and blaming their victims when they kill, or we can be free men and women who have chosen to take the power to defend our rights into our own hands. While a thousand organizations use the Holocaust as a platform for speeches about tolerance, Children of Jewish Holocaust Survivors is conducting firearms training. While Big Media attacks a free press in the name of the free press, a small group gathered in Garland and an off-duty cop helped keep it free.

The unnamed traffic cop who stood up to two offended killers did not follow Gandhi’s advice; he refused to lay down his arms or try to fight them with non-violent arms. His heroism reminds us that freedom is not defended with empty idealism easily perverted into appeasement of evil, but with the force of arms.

Gandhi and his Western disciples were wrong. The soldiers who fought Hitler did far more to save humanity than Gandhi ever did. A single traffic cop with a gun has had more of a positive impact on freedom of speech in this country than all the journalists of the free press fighting against freedom.

It takes a good guy with a gun to defend freedom of speech.