David Letterman’s departure isn’t the end of an era. The era of late night talk shows ended a while back. 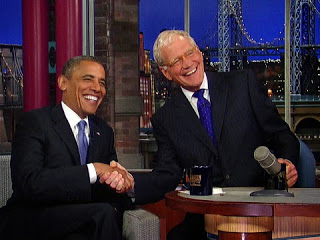 In Johnny Carson’s final week in the nineties, he played to an audience of twenty million. Lately, Letterman has been lucky to get 2 million. His final shows have played to around 5 million viewers.

Late night talk shows still exist, but their intended audience mainly watches viral clips from them the next day. The average age of Letterman’s audience is 54. CBS hopes that the equally smarmy Stephen Colbert will be able to bring his younger audience demo with him, but even Jimmy Fallon couldn’t bring down the average age demo all that much. Colbert will shave a few years off and then spend his time getting old and stale. Even before then, the networks will collapse and take his new job with it.

The Late Show isn’t a beloved American institution. It was created by Letterman’s inflated sense of entitlement. It failed in its purpose, as Letterman lost to Leno, and it won’t outlive Letterman by long.

The tributes to Letterman carry heavy doses of media self-importance and self-pity. And these days the two are one and the same. The media isn’t really nostalgic for Letterman’s smarmy laugh; it’s mourning the loss of a time when limited options maintained captive audiences for every fellow media dork awarded a big three network microphone and its incredible power of nationwide prime time airtime.

It’s a power that doesn’t seem all that impressive now when worldwide audiences are a click away.

That’s why the controversies over Brian Williams or George Stephanopoulos are tempests in a broken teapot. The days when a Walter Cronkite could embody the news are gone. The days when a David Letterman sneer could drive public opinion have gone with it. In his last years, Letterman was trying and failing to compete, not with Jay Leno, but with a world of YouTube base jumping and cat video clips.

Younger hosts are slobbering over Letterman to be able to pretend that they too are a direct link to Dick Cavett or Johnny Carson, instead of glorified Buzzfeed employees whose real job is producing 2-minute clips viral enough that next morning mobile users will wait through a 30-second ad to watch them.

Like the leftovers of the media, Letterman’s job had become a comfortable sinecure. He said all the right things about how awful Republicans were, even if no one was paying attention, and in return his colleagues in the media avoided asking too many uncomfortable questions about his sexual harassment, the resulting manufactured blackmail incident and the toxic environment behind the curtain.

It’s this same culture of complicity that allowed Brian Williams to get away with telling so many crazy lies for so long or allowed George Stephanopoulos to play journalist. The mafia has nothing on the media when it comes to keeping quiet about the sins of progressive colleagues. He may have been a sleazeball who had issues with women, but like the BBC’s Jimmy Savile, he was their sleazeball.

Dave’s media pals forgave his many sins. The biggest of these may have been that he wasn’t funny. No matter how much the media tried to prop him up as the thinking man’s late show host, audiences knew better. A decade in, Letterman had fallen into the bad habit of many successful comedians of beating a routine into the ground. But his awkward fumbling comedy had never been funny to begin with.

Beating it into the ground only made it worse. 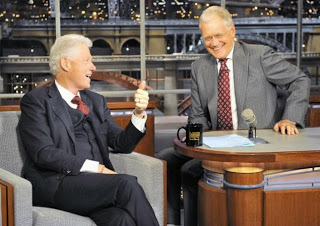 Letterman survived his lean years by fawning over Democrats. He could be counted on to pitch softball questions to Hillary Clinton or ridicule every objection to Bill Clinton and Barack Obama. Now he is being replaced by Stephen Colbert who embodies Letterman’s sole virtue of mocking Republicans. Colbert exists entirely in the negative space occupied by Letterman’s humorless sneering.

Comedy has become politically tribal. The only safe subjects for humor are jokes at the comedian’s own expense and the ridicule of outgroups in order to reinforce the prejudices of the ingroup community. The showy insecurity or awkwardness of progressive comedians like Jon Stewart and Letterman serves as cover for the degraded state of their comedy which consists of pointing and laughing at the other tribe.

Letterman had anticipated the progressive direction of comedy. He had been ahead of his time in realizing that the only truly safe jokes in a politically correct media environment are aimed at Republicans. He had understood that arch knowingness counted for more than sharp comedic timing or a quick wit because it would seem like intelligence and even sincerity to duller audience members.

He knew that the media would not care if he was funny, only that he carried forward its agenda. If he didn’t, it would call him a sellout and a hack. If he did, it would pretend to laugh at all his jokes.

Most of all he realized that politically correct comedy needs an edgy façade to mask its cowardice.

Progressive comedy is above all else lazy and Letterman was the laziest man in comedy. He had more staffers than Eisenhower all to deploy the thousandth itineration of the same joke. He used his power to fill the time slots after him with hosts who couldn’t possibly compete with him to avoid being Conaned. 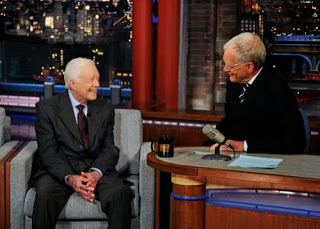 He was not a liberal by conviction, but out of laziness. When challenged by guests like Bill O’Reilly, he quickly folded. His politics were not thought out, they were unthinking. For all his pretense of eccentricity, he was a conformist who understood that if he played the game, he would get paid. His comic personality, the folksy skepticism and detached disdain served up in measured doses to viewers, was calculated to cover up this essential attribute that defined his enormously lucrative career.

Letterman is a professional sycophant who limos off into the sunset to the strains of the sycophantic braying of a dying industry. As audiences dwindle, the media has become its own audience, mourning the passing of its glorious past by taking hits of nostalgia from its heady days of power and privilege.

The mournful tributes piling up in his wake aren’t about him. Network television is dying. Letterman was one of its last national figures. If you think mainstream media outlets are carrying on over his exit, wait until network television dies its inevitable demographic death.

Then the media will really have something to cry about.