Obama can’t defeat ISIS with soft power, though ISIS could beat him with soft power assuming its Caliph ever decided to agree to sit down at a table with John Kerry without beheading him. Iran has picked up billions in sanctions relief and the right to take over Yemen and raid ships in international waters in the Persian Gulf just for agreeing to listen to Kerry talk for an hour. 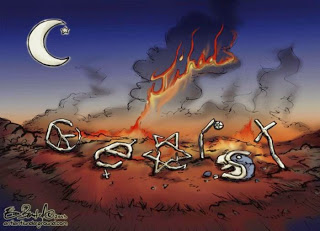 As bad as having your capital or ship seized by Iran is, listening to John Kerry talk is even worse.

If ISIS were to agree to a deal, it could pick up Baghdad and Damascus just in exchange for showing up. All it would have to do is find a Jihadi who hasn’t chopped off any heads on camera to present as a moderate. The administration and its media operatives would accuse anyone who disagreed of aiding the ISIS hardliners at the expense of the ISIS moderates who also represent the hardliners.

If Obama did that, he would at least lose in a way that he understands; instead of in a way he doesn’t.

So far ISIS has preferred the classical approach of killing everything in its path. The approach, deemed insufficiently nuanced by masters of subtlety like Obama and Kerry, has worked surprisingly well. Their response, which is big on the Bush arsenal of drone strikes, Special Forces raids and selective air strikes, hasn’t. But Bush was fighting terrorist groups, not unrecognized states capable of taking on armies.

It’s hard to destroy something if you don’t know what it is. And it’s hard to know what a thing is if you won’t even call it by its name or name its ideology.

The left loves root causes, but the root cause of ISIS isn’t poverty, unemployment or a lack of democracy.

The Islamic State isn’t unnatural. Its strength comes from being an organic part of the region, the religion and its culture. Its Arab enemies have performed so poorly fighting it because their institutions, their governments and their armies are unstable imitations of Western entities.

The United States can’t make the Iraqi army work because Iraq isn’t America. The assumptions about meritocracy, loyalty to comrades and initiative that make our military work are foreign in Iraq and Afghanistan where the fundamental unit is not the nation, but the tribe, clan and group.

Iraq and Syria aren’t countries; they’re collections of quarreling tribes that were forced into an arrangement that included the forms of Western government without any of the substance. When the Europeans left, kingdoms quickly became military juntas. Now the juntas are fighting for survival against Islamic insurgencies that are striving to return the region to what it was in the days of Mohammed.

ISIS is the ultimate decolonization effort. It’s what the left claims that it wants. But real decolonization means stripping away everything the Europeans brought, including constitutions, labor unions and elections. The cities that ISIS controls have been truly decolonized. There is no music, there are no rights, slavery is back and every decision is made by a cleric with a militia or a militia leader with a cleric.

ISIS, or something very much like it, was always waiting to reemerge out of the chaos. Before ISIS, there were the Wahhabi armies of the Ikhwan which did most of the same things as ISIS. The British bombed them to pieces in the 1920s and the remainder became the Saudi Arabian National Guard. The insistence on democratic institutions weakened the military juntas holding back Islamist insurgencies. Islamists took power across the region. Where they couldn’t win elections, they went to war. But whether they won on the battlefield or the ballot box, violence and instability followed them. 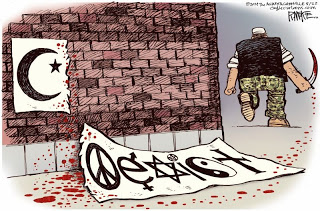 The fundamental mistake of the Arab Spring was the failure to understand that Islamist democracy is still a road leading to the Caliphate. Turkey’s Erdogan, the Islamist whose rule was used to prove that Islamist democracy can work, now openly promotes the reestablishment of the Ottoman Empire. Or as Mullah Krekar of Ansar Al-Islam put it, “The resistance is not only a reaction to the American invasion; it is part of the continuous Islamic struggle since the collapse of the Caliphate. All Islamic struggles since then are part of one organized efforts to bring back the Caliphate.” A decade later, the Norwegian Jihadist leader has proven to be more accurate than his Western hosts.

ISIS is not a reaction. It’s the underlying pathology in the Muslim world. Everything planted on top of that, from democracy to dictatorships, from smartphones to soft drinks, suppresses the disease. But the disease is always there. The left insists that Western colonialism is the problem. But the true regional alternative to Western colonialism is slavery, genocide and the tyranny of Jihadist bandit armies.

Our policy for fighting ISIS is colonialism by another name. We are trying to reform Iraqi institutions in line with our values and build a viable Iraqi military along the lines of our own military. We’re doing much of what the British were doing, but without their financial interests or imperial ambitions.

And all of this is reluctantly overseen by Barack Obama; the progressive campaigner against colonialism.

To deal with a problem, we must be honest about what it is and what we are doing about it. If we lie to ourselves, we cannot and will not succeed. After the failure of democracy and political Islam, Obama has been forced to return to what works. Islamization has failed and so we are back to trying Westernization. The missing element is admitting that Islamization has failed because Islam was the problem all along. The West is the solution.

But institutional Westernization that that never goes beyond a few government offices and military officers won’t work. Neither will the attempt to artificially inject a few big ideas such as democracy into an undemocratic tribal culture. The only alternative to depending on military juntas is transforming the people. Sunni Gulf Arabs responded to their military and economic dependence on the West with a largely successful campaign to Islamize the West. The West won a culture war with the USSR. It is capable of winning one with Saudi Arabia. It has even unintentionally won a culture war with Iran.

ISIS is not a military force. It is a cultural one. Much of its success has come from its cultural appeal.

As long as the Middle East is defined in terms of Islam, some variation of the Islamic State or the Muslim Brotherhood bent on recreating the Caliphate will continue reemerging. We can accept that and give up, but the growing number of Muslim migrants and settlers mean that it will emerge in our country as well. 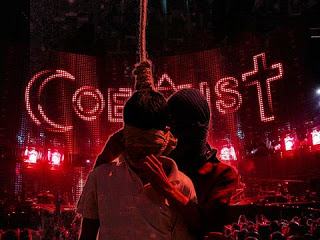 After defeating Saddam, we pursued the de-Baathization of Iraq. If we are going to intervene in the Muslim world, it should not be to reward one Islamist group, whether it’s Iran or the Muslim Brotherhood, at the expense of another. Instead we must carve out secular spaces by making it clear that our support is conditional on civil rights for Christians, non-believers and other non-Muslims.

Our most potent weapon isn’t the jet, it’s our culture. We disrupt Islamists with our culture even when we aren’t trying. Imagine what we could accomplish if we really tried.

But first we must abandon the idea that we need to take sides in Islamic civil wars. Any intervention we undertake should be conditioned on a reciprocal degree of de-Islamization from those governments that we are protecting. Instead of pursuing democracy, we should strengthen non-Islamic and counter-Islamic forces in the Muslim world.

We can’t beat ISIS with Islam and we can’t fight for freedom while endorsing constitutions that make Sharia law into the law of the land in places like Iraq and Libya.

We don’t only need to defeat ISIS. We must defeat the culture that makes ISIS inevitable.

Movie Review: "Tomorrowland" ONE out of Five Stars

Fall of Rome: A Mini-lesson in History