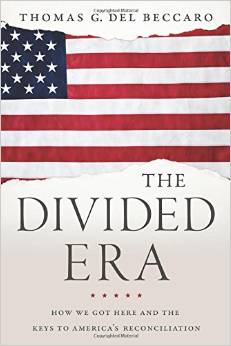 “Why is there so much fighting in politics today?” That is perhaps the question of the decade and it is the premise of Thomas (Tom) Del Beccaro’s book, The Divided Era:  How We Got Here and the Keys to America’s Reconciliation.

Throughout the Obama presidency America seems more divisive than ever before. With an administration that appears bent on creating adversity and conflict, many Americans have drawn firm lines in the sand and are almost daring the “other side” to cross it. The Tea Party Movement was largely born out of this deep-seated sense of frustration, out of a need to do something, say something.

Interestingly, the Tea Party Movement membership was initially comprised of “up to 40 percent self-identified Democrats and Independent voters,” people who believed both major parties were “practicing poor, if not reckless, fiscal management.” Chatter of a third party is often heard amongst these crowds, as a way to challenge the stagnancy of both the Republican and Democrat Parties.

But this isn’t the first time it’s happened.

Other third party type-activists have emerged throughout history, from the Greenback Party of the 1800’s to Ross Perot’s Reform Party of the 1990’s.

“Perhaps the more significant indicator of the growing philosophical divide over the growth in our governments is the emergence of movements, initiated by groups resembling third parties, that focus on the proper scope of government…we shall find that throughout history third parties have emerged during divisive times. They usually get started because a significant minority of Americans does not feel the major parties of the time are resolving a specific issue in their favor.”

“With so much at stake each day, it is nearly impossible for Americans and their businesses to sit on the sidelines while others decide their fate,” Del Beccaro continues. “As a result, our coliseums, once known for sports, have become our chambers of government, pitting citizen against citizen, business against business, taxpayer against tax user, and endless combinations of the same.”

Are we living in the most Divided Era in American history, or are we so wrapped up in 1st World issues that we’ve forgotten where we’ve been and how very far we’ve come?  Chapter 2, entitled The Storm Before the Calm, discusses the events leading up to the Revolutionary War and the outstanding–and unifying–leadership of our first president:

“George Washington’s life and his Unifying Moment as president were not based on him being against something but, instead, being for something.”

During this “major divided period” prior to the American Revolution, citizen was pitted against citizen, many who weren’t yet ready to leave the “security” of England’s rule. What ultimately caused our break was what Del Beccaro refers to as the Partisan Catalyst Dynamic—the realization that with every cause there is an effect. With the imposition of the Stamp Tax, Patrick Henry had no choice but to commit treason and take a strong, rebellious stance.

“Like Patrick Henry, many today would not be motivated to rise up if government did not affect them so much—if the fence between them and their government was not jeopardized in so many ways…It is key to understanding today’s conflict. Indeed, the Divided Era in which we live is the result of government affecting more people in more ways than ever before—and they are reacting by getting involved and demanding others do so.”

Interestingly, even months after the War of Independence began many (“probably most”) Americans still didn’t want independence from England. These were the Quakers and peace-minded folks (dare we say “Establishment-types”?) who simply wanted to go along to get along. They thought of the “rebellion-minded Yankees, Scotch-Irish, and Virginians” as troublemakers—but imagine where we’d all be now if we’d listened to them.

Luckily for America, the Divided Era of the both the Revolutionary and Civil Wars began and ended with strong leadership in presidents Washington and Lincoln. “They didn’t moderate their views when faced with difficult political and military challenges—and History is grateful to them,” writes Del Beccaro. “Their examples demonstrate that, at times, only what has sometimes been described as extreme partisanship can achieve certain results. So it may well be today.”

Today with all of the past events leading up to our current “Perfect Storm” of divisiveness in America, will we be forced to go down the same path as our ancestors and fight our way out of this Divided Era– or is there hope for resolution without revolution?

Yes, says Del Beccaro, but only if citizens understand the growing source of our divisions: ever larger governments. Americans must demand that government shrink back to a less divisive size and scope and support leaders capable of setting unifying goals–for which Del Beccaro offers five key strategies. In fact, the consequences of not slimming the behemoth governments–federal, state, and local–will only lead to an ever widening divide, and more acrimonious and harmful partisanship.

The Divided Era lays out the case for smaller government, more responsive political leadership, and ultimately a more cohesive citizenry.

The Divided Era also offers sound advice to future leaders in hopes of heading off a “serious crisis” and implores all of us not to ignore history.

“[I]t is usually the conceit of the people of any age to largely ignore the warnings of the past and instead march ahead unheeded under the assumption that they are smarter than those that walked before them. Obviously, America has not been immune to such tendencies, and as we change from James Monroe to Barack Obama, our political competition increases with each passing government appropriation. If we are to rise above the current partisan divide, we must be more understanding than to blame the partisans for their largely reactionary, if not self-interested, participation…The federal government has let it be known that it wants to end the coal industry. Should the industry compromise or just walk away from its way of life? Did Patrick Henry walk away over a tax that likely would have less than a penny for most transactions?”

Finally, The Divided Era challenges all of us to seek leaders who understand the nature of humans and to lead with strength and courage.

“We must find leaders who understand the value of a unifying vision and have the character and resolve to maintain it—and that leadership starts with our own understanding.”

I highly recommend this book for anyone who wants a clear, concise explanation of the extreme divisiveness we’re currently experiencing and what we can do to get things back on course. It’s also a must-read for students, reminding them of Winston Churchill’s words:  “Those who fail to learn from history are doomed to repeat it.”

The Divided Era: How We Got Here And the Keys to America’s Reconciliation will be in bookstores May 26, or you can pre-order NOW on Amazon. You can get also order an autographed copy via Tom Del Beccaro’s website here.

Baltimore State's Attorney Stage Side In Honor of Freddy Gray

Top Bogus Stories of the Week