A Righteous Deception is Still a Deception… 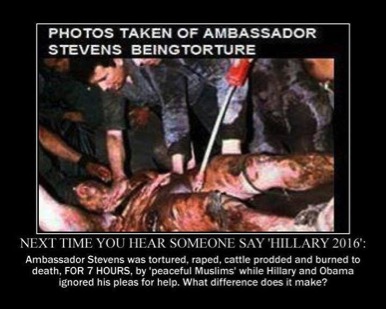 While (thankfully) there weren’t any major ‘Bogus Stories of the Week,’ we’re starting to once again see this photo (shown right) circulating in conservative circles.  The meme began circulating shortly after news broke of the murder of U.S. Ambassador Stevens on September 11, 2012. There were numerous photos of the Ambassador being dragged through the streets of Benghazi and most were legitimate.  The very graphic photo of a body being tortured ended up being favored among folks on the Right–but is NOT a photo of Ambassador Stevens.

Here is an article dated November 20, 2009 using the same photo. You can deduce from that information that a photo used in 2009 cannot have time traveled backwards from 2012 and is therefore not a picture of Ambassador Stevens.

There are other stories in 2009 and 2010 using the same picture, including THIS article from an Argentina website in February 2012 (6 months prior to the Benghazi attack).

And here is an article captioning the alleged ‘Benghazi’ torture picture as a “photograph of alleged torture by Argentinian authorities in the 1980s, during President Raul Alfonsin’s democratic rule.”

If that isn’t enough evidence for you…you might want to consider that the men in the photo are all wearing blue jumpsuits. No other photos coming out of Libya that day show men dressed in this fashion. You might also want to consider that there is mud all over the man photographed and the guys holding him down. It was not raining the night of the attack in Libya and there were no signs of mud. Finally, the poor soul pictured above is much more muscular and stocky than Ambassador Stevens who was tall and skinny.

What Hillary allowed to happen while in charge of U.S. State Department, should not only preclude her from ever being elected to another office, but should lead to her being criminally charged for lying and covering up those lies. She should be sentenced to prison for her gross negligence and Obama should have a cell next door to hers for his own role in the deception. What this administration allowed to happen in Libya, Iraq, and in places all over the world should not go unpunished, but we must be vigilant to share the TRUTH not some distorted version of the truth.

SC Gov. Nikki Haley Calls on Pastors to Join Her for Fasting & Prayer