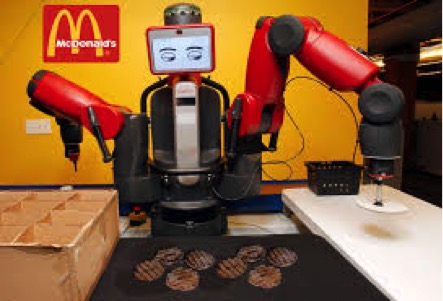 This week we have a bogus story that’s moving fast…as in fast food. Several satirical and fake websites have posted stories alleging that Phoenix, Arizona either has or will have by July, a fully robotic McDonald’s staff. In an attempt to make it sound credible…the article says that a few humans will remain to maintain the robots who will be doing the heavy lifting, frying, and other fast food jobs.

A few of the sites hosting this bogus story are Pholx Magazine, govtslaves and the origin of the story Newsexaminer (a sneaky site that sometimes post real stories to mask the fake ones and it doesn’t explain which is real and which is fake).

Here’s how you can tell when a story like this is bogus…do a Google search and if not one single major news group has this story…it’s likely not true. There are a few other sites like “before it’s news” who will post these stories but check out the links and you will see they are dead end links or lead back to the same source that is posting the story. So, if the proof is basically “because the unnamed author said so” it’s likely fake. In the News Examiner case…you can know the story is fake because they claim “Paul Horner” was the spokesperson for McDonalds and he has long been an established satirist. His name is legendary among fake news stories around the internet.

While we can’t look forward to robots serving our food this summer, here in Europe you can already use automation to order at McDonalds and that is coming to America. I suspect that in the near future the cost of labor will make robots a profitable option and we will likely see it one day. Rest assured that when that day comes it will be front page news and not some secret only found by little known webpages. McDonalds would pull out all the stops to promote such an opening.