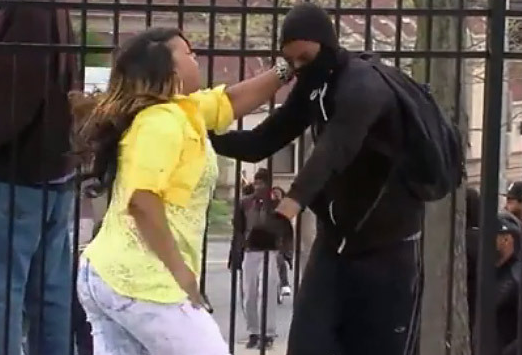 It’s 11 PM. Do you know where your children are?

It’s a tired old question, the mere mention of which has come to sound cliché. But traditional American values, those ancient ideals so fast being regarded as obsolete, have always emphasized the importance of the family and the personal responsibility parents take for the safety, deep love and well-being of their kids. There was a time in this country when children and teenagers caught misbehaving in public would scarcely be scolded by the police, and feared them only because they knew where the officers would take them: Not to a jail cell, though many might have preferred that. No, miscreant children in those days knew they were going home, where Mom and Dad would have a lot of questions about why their pride and joy just got ear-dragged back by a cop. Sadly, those days are gone.

Or maybe not. Amidst all the turmoil and senseless violence that has erupted in Baltimore, there has been one encouraging, even uplifting event: Seeing her teenage son on the news joining in a riot and throwing rocks at police, an irate mother took to the streets, tracking down her errant boy and physically engaging him. A video of the incident has gone viral on the Internet, and in it the mother can be heard screaming “Are you serious?” at the boy – along with a few other choice phrases far less fit for print. The mother has not been identified by news sources, but she has publicly explained herself and her outrage, saying she will not tolerate clashes with police from her son, and that anyone who knows her knows that it is true. Some may see her methods as extreme – she is seen several times on the video to smack her son, who looks embarrassed as he tries to skulk away – but even now, most people are seeing it for what it is: Down-home, old-fashioned, responsible parenting. Even the chief of police in Baltimore has spoken out in praise of her actions.

We need more parents, parenting like this. We need more of our families willing to put their foot down and demand a higher standard of behavior from their children, no matter what it takes. With her courage and fierce maternal passion, against all odds, this woman has set an example that is now being seen across the country and even around the world. But perhaps more importantly, more personal to her family, through her family’s adversity, she has taught a lesson that none of her kids are likely ever to forget.

And she has five other children.

Liberty and Justice for All—Except for Christians

Hillary Clinton: The Secretary Disavows Any Knowledge of Her Actions