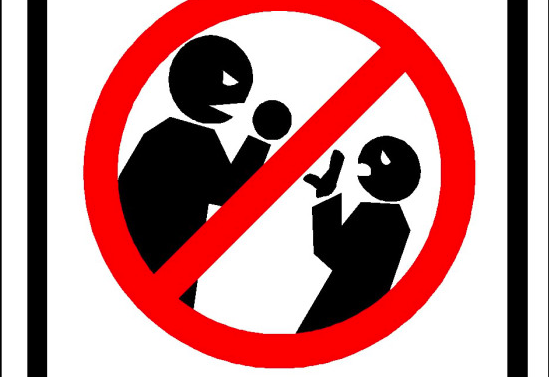 For the record, I am not a fan of the anti-bullying assemblies, programs, and policies that the public schools have in place, including Zero Tolerance rules that puts kindergartners on suspension for their toast being eaten into the shame of a gun. And No Bully Zone that makes the victim have the same punishment as the perpetrator, resulting in reams of paper filed in order to get “eye witness accounts” and “investigate the incident.”

None of these things are working and if you ask just about any teacher who has been teaching for 20 years or more they will tell you the same. I even had a teacher tell me that just the threat of corporal punishment made kids behave better in years past. Don’t misunderstand the point of this article; it is not my intention to discuss corporal punishment in schools. I have mixed feelings about it myself.

The father explains it this way:

The woman proceeded to setup her display: a life-size paper man that she taped to the wall, a small blue basket, and a handful of paper clippings.

The woman passed out the small pieces of paper to the class and told the young children that they had to write down a swear word (or phrase). It had to be a swear word and it had to be something that someone has said to them in the past. She then collected the pieces of paper from the students into her blue basket and mixed them up.

After this was done the woman had the children come up and take a piece of paper from the basket and read it aloud. She instructed them to read it like they meant it.

Thus, we end up with fourth grade students screaming epithets like, “ “F#@K YOU!,” “You Gay Whore!” and “You [email protected]#KER!”

Can you imagine standing outside that classroom that day and hearing that garbage?

Now, my boys are not perfect little angels, but I can almost 100% guarantee that the worst thing they could think of to write down would be something like, “You’re stupid and you smell like diarrhea,” or something like that. At 11 and 9, they are still pretty innocent.

Many other children are exposed to more harsh language. Heck, even mine are exposed to harsh language at times when they’re in the car with me during heavy traffic. However, nothing like those words, “You Gay Whore,” have ever come out of my mouth. Shoot, now I’m concerned that this epithet will cross my mind in the future!

I would be pretty mad if they were exposed to these words during a school “lesson.” Because now, for sure, those three words are probably stuck in their psyches. And invite the question about what a “gay whore” even is. Maybe I don’t want to have that conversation right now.

The teacher responded to the concerned parent’s questions, verifying that what his child told him about the lesson was true. The teacher said it was out of his hands as the principal was the one who endorsed it. Even the vice principal was appalled at this “no bullying lesson.”

Common Core's Arne Duncan Is At It Again...