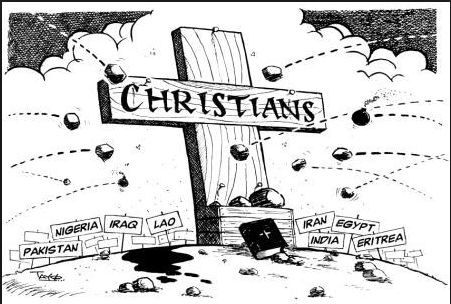 The persecution and intolerance of Christians has reached a level that none of us have seen in our lifetime. The venom is all around us, from lawsuits against Christian bakers to the wholesale slaughter of Christians in Kenya by ISIS. It is a time of political correctness and unprecedented intolerance of anything related to Christianity. Pundits, bloggers, lawyers, and terrorists seek to remove any vestige of Christianity from the world we live in.

Yet, they forget. Or, maybe they don’t know.

Christianity is not just a religion. It is about a man. One man. Like no other before or since. His name is possibly both the most beloved, and the most hated, in all of human history.

Though many things, good and bad, have been done in his name, his reason for existing on this planet boils down to just one thing:

Who was this man? How could anyone love that much to go through all that he did? Willingly. Without regret. Yet, that is what he did. How can someone who loved so freely and gave so much be hated so vehemently? Is it because they do not know that Christianity is not so much about a dogma as it is about a person, a real, live human being who actually walked and lived among mankind, and gave up everything he had – solely out of love?

Jesus was a man born in Bethlehem – this is historical fact, not religion. He lived and taught in the Middle East, drawing a crowd of faithful followers who embraced his teachings, and watched his life and his love for all mankind. Then he was arrested, beaten, tortured, and then executed by one of the most cruel methods known to man. Again, this is historical fact, supported by countless documents and historians of the time period. Then he rose from the dead and appeared to hundreds of people. Though this is the part of the story most discounted, it is corroborated by more witnesses than virtually every other event in human history.

This man was betrayed by one of his closest friends. He was viciously beaten by soldiers. Today, we read with horror the news reports of people being publicly whipped under Sharia law, a punishment causing excruciating pain and scarring, and sometimes death. Jesus was not just beaten with a whip or cane. The weapon the soldiers used was a cat-of-nine-tails, a sadistic whip with nine extensions, each of which had pieces of bone or glass in them, designed to inflict maximum damage.

Then, this man, not a fairy tale or legend, but a real, actual person who existed in history, was forced to carry a wooden beam through the streets of Jerusalem, to the place where he knew that he was going to be executed on the very cross he carried.

This man did all of this willingly, out of love! Yet, he is hated, mocked, and his followers threatened all over the world.

How can this be?

We hear the mantra continuously that we must be tolerant, embrace others, and not judge. Yet that is the opposite of what often happens when the name “Jesus” is mentioned.

Can you imagine hating on a soldier or football celebrity or government leader, or a friend, who did everything that Jesus did for someone else? It is right that we celebrate the person who goes above and beyond for others. The firefighter who runs into a burning building to save a child is rightfully called a hero. The soldier who throws himself on a grenade to save his fellow soldiers is rightfully called a hero.

That is what Jesus did for you and me – he sacrificed his life to save others, for no reason other than love. That is, by definition, a hero. What he did was pretty amazing.

So, then, why is there all the hatred and intolerance toward him, and to those who love him? I don’t understand.

Who Will Defend Religious Freedom?