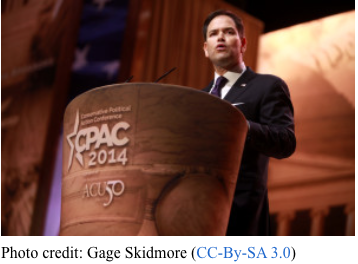 Rand Paul and Ted Cruz have both been firmly against Common Core and in favor of local control of education with parental oversight, although Senator Paul did not sign the Grassley letter against it and I would like to hear from him regarding that ommission. Hillary and Jeb firmly in favor of nationalized education.

U.S. Senator Marco Rubio (R-FL) has announced he is running for President. Where does he stand on Common Core and NCLB? His name is also missing from the Grassley letter, but we need to investigate further.

Shane Vander Hart reviews Marco Rubio’s rhetoric and record for us in this article from Truth in American Education:

U.S. Senator Marco Rubio (R-FL) announced his candidacy for President of the United States last night. Where does the junior Senator from Florida stand on the Common Core State Standards and NCLB reauthorization?

Here are three instances we have cited in the past where Rubio has voiced opposition.

In 2011, Rubio sent a letter to U.S. Education Secretary Arne Duncan opposing his use of NCLB conditional waivers to entice states to adopt the Common Core State Standards.

He was silent on the issue until 2013 when he was videoed discussing the Common Core State Standards. Here is an except of what he said:

He reemphasized his opposition at Americans for Prosperity’s Defending the American Dream Summit in 2013 as well.

He has likely discussed the Common Core since, but I just haven’t written about it.

He voted along with other members of the Republican Senate Caucus in favor of the Local Control of Education Act that was passed as a budget amendment last month. He was not one of the Senators who signed onto U.S. Senator Chuck Grassley’s letter however. His position on No Child Left Behind reauthorization is unknown as well. He touted school choice during his announcement speech, but made no mention of any other education-related issue. Education is not listed in the issues section of his website yet.

For the links and more from Truth in American Education:

The Chickification of the Presidency

"Liberty, Once Lost, Is Lost Forever."