A friend of mine recently told me about a Patriot activist in Texas who was pulled over for a routine traffic stop, only for it to quickly turn sour. What happened to this freedom loving lady and her son parallels other law enforcement mishandlings we’ve been seeing around our country.

I contacted Amy Hedtke after the incident last week. She told me:

The stop began as a normal, peaceful stop. The officer stated the reason for the stop was “speeding,” and he requested my ID and insurance information. I complied. The officer did not ask for my vehicle’s registration or address.

As he was walking back to his car, my teenage son, Eric, stepped out of our car to use the bathroom in the gas station and get a drink, at which point the officer yelled at him to get back in the vehicle.

That’s when I told Eric to wait while I asked the officer to clarify what law prevents a passenger who is not the subject of the traffic stop from leaving the vehicle.

The officer replied with a lot of different words, but never actually cited any specific law. I called 911 to request backup to help give the officer the opportunity to cite a law. At this point, I began ustreaming. 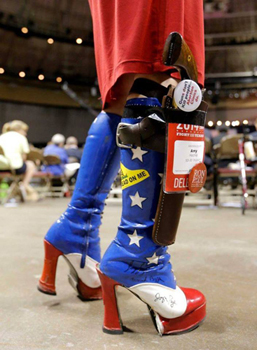 According to Jason Vaughn of TexasGOPVote.com, and a friend of Amy’s, said in an article titled, “Momma Bears and Oathbreakers:”

Amy is a phenomenal human being who will give to the last measure even to help a stranger in need, she is also a firebrand who is not afraid to speak truth to power.

Amy is a ticked off momma bear who has paid attention and knows the danger of police overreach. Don’t forget that due to such overreach in some cases, almost 800 children were killed (either by accident or murder) in Child Protective Services just in the past few years.

You then can see from the video that the officers refuse to tell her what laws she is breaking and where their authority to detain her son comes from. It may well exist, but if an officer can’t describe it, then he likely doesn’t know it. The most bizarre answer is that he says it is “case law” and then goes “I’m not a lawyer” as if police officers don’t actually need to know the law to do their job.

If you’re a parent or someone like me that believes deeply in parental rights, you’re infuriated that officers would try to separate Amy from her son and question him while another officer questioned her.

The officers then demand the boy stay out of the vehicle when she tells him to not answer questions and get in the van, but they order her to enter the van and leave her son to this unsupervised questioning. Remember this encounter started because they demanded the boy wanted to use the restroom and re-enter the vehicle.

Amy was charged with failure to obey the law and two other charges. She presently has an attorney handling her case.

While I would have initially taken a softer approach with the officer, I would have been livid if my child was being questioned by the officers and I was confined to sitting in the police vehicle.

Patriotic Momma bears, I think we all need to have a pair of boots like Amy’s (see picture).

The Right Side, The Left Side and the Blind Side of Politics