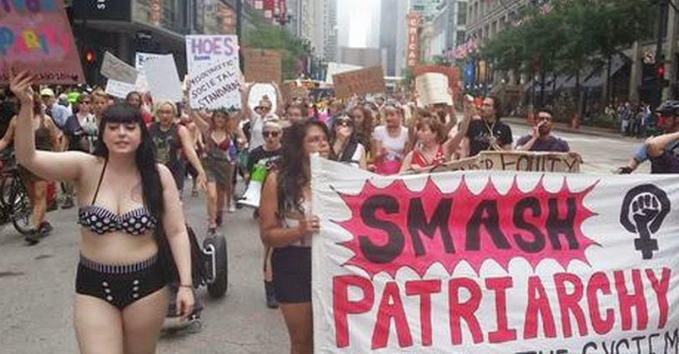 While the left accuses Republican women of pushing the feminist movement back to the 1950’s, I offer that feminists of 2015 are dragging women back into the caveman caves. Feminists are successfully diverting attention away from a woman’s heart and mind and have devalued all of womanhood into nothing more than walking vaginas (which they literally dressed as at the 2012 DNC). Whether demanding Big Daddy Government pay for her every sexual desires via birth control and/or abortions or insisting on being given free tampons, today’s feminist movement has relegated women to nothing more than mindless, needy piles of sexual mush.

If you don’t believe me, take a look at many of the top paid women in the music industry, television and/or cable television shows (all of the Kardashians come to mind…).  It’s almost impossible to imagine what would happen if they were ever asked to use their brains instead of their bodies.

Of course the main reason feminists are desperately trying to divert attention towards our ‘lady parts’ is because we have already earned the necessary right to vote and are mostly equal in the workplace (despite the misleading ‘. 77 on the dollar’ bunk). So what’s left for activists? Just like the Sharpton’s and Jackson’s of the civil rights movements, feminists were very necessary at a certain time and place in history.  But now these dinosaurs are fighting to stay relevant and relive the (very real) drama of their past–which is where their fight now belongs: in the past.

Nothing proved the need to put an end to the degrading feminist movement more so than last year’s VMA and Emmy awards shows. At the VMA’s, Beyonce was lauded for writhing around a stage like a stripper singing about ‘popping cherries’ and sitting spread-eagle with the giant word “Feminist” shining behind her. On the other hand at the Emmys Sofia Vergara was featured as a strong, beautiful, fully clothed, classy, funny, successful woman and the left went insane. They claimed Sofia–and not Beyonce–was “objectifying” women. What they really mean, but aren’t allowed to say out loud, is that Sofia wasn’t focusing on her vagina the way Beyonce was. Feminists believe if you’re a woman and aren’t directing attention to everything neck-down, you are a problem.

In our book What Women (Really) Want co-written by Dr. Gina Loudon and Morgan Brittany, we offer that today’s ‘feminist movement’ has nothing to do with any derivative of the word ‘feminine’ at all. It instead needs to be renamed and rebranded to more accurately portray what it actually is: Sexualism. Today’s ‘Sexualists’ will never encourage women to be strong and independent. They want women to focus on having sex—lots of it, with lots of people. They want women to throw away the social rubrics of the past; stop focusing on boring, old-fashioned things like home and family—that is for boring, old-fashioned Republican women.  Like the movie The Stepford Wives, if Sexualists are successful in their quest they will turn American women into nothing more than empty, non-thinking sexual slugs—women who will never worry about silly things like politics, the economy, social mores, anything.  Of course when I mentioned this during our book launch on Fox and Friends we were pounded by the liberal media.  This photo accompanied one particularly scathing article about us but seriously, how DARE a woman vacuum her own floor wearing nice clothes!  (Sigh…)

I believe we need to start a new crusade: the Feminine Movement. We Feminine-ists will represent strong, confident, independent women who care about our families and homes. We will fearlessly work in the home or out, and will teach our children values and principles and encourage them to stand strong for them. We will fight for our country, our beliefs, and will raise people up instead of putting them down. If a man compliments us, we will smile and say ‘thank you’ instead of threatening to sue them for sexual harassment.   In other words, we refuse to be placed in some ancient Feminist box and will celebrate the unique, well-rounded, caring, fun, and funny women we were born to be.

And yes, if we want to vacuum our floors while wearing pretty dresses, so be it.  Dammit.