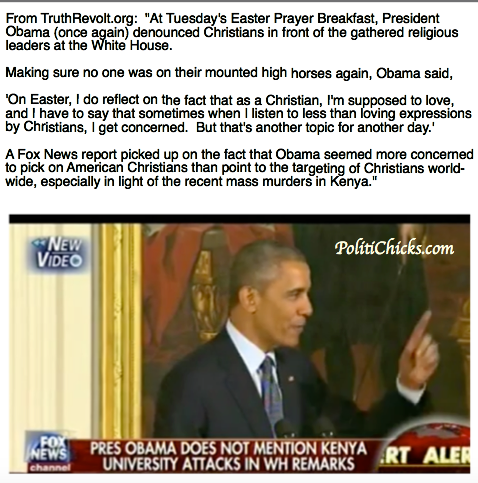 Many have asked why President Obama made unpleasant remarks against Christians at the recent prayer breakfast.  In light of the tragic event of 147 innocent Christian students slaughtered in Kenya by radical Islamic terrorists during Holy Week, it would seem an inappropriate choice for the President to chastise Christians.  But that’s exactly what he did, making not-so-veiled references to the Indiana and Arkansas RIFRA laws and not mentioning the horrible takeover of the Islamic religion by radical terrorists. However, when you look at who was in attendance at this event and one of the keynote speakers, you begin to understand the motivation behinds the president’s continued attack on the Christian faith.

Let’s break it down.

The President began his speech with several jokes. One was whether the people in attendance actually got enough to eat, and the other was concerning his two daughters, Sasha and Maliah visiting colleges and asking for prayers on becoming an empty nest home. Then President Obama moved on to reflect the apostle Paul and Peter and discussed how we should love one another and strive to be better–and that’s when he launched into his criticism of Christians.  Seeming to force himself from saying more, he said he was “about to veer off; I’m pulling it back” followed by laughter and clapping of support. His speech was brief, and then he turned over the podium to another guest, Reverend Dr. Amy Butler, who gave the prayer. Dr. Butler is the first female pastor of the ultra-progressive, 85-year old Riverside Church in New York City.

To understand the speech by President Obama–and the approval of his audience–is to know what Progressive Christianity is and what members who attend Riverside Church believe. Many in attendance at the President’s Easter prayer breakfast were clergy of various progressive churches. If you’re unfamiliar with this branch of religion,  here are the 8 points of Progressive Christianity:

“What defines a progressive Christian can really mean anything other than a fundamentalist / conservative-evangelical Christian, and it has been a label that has been evolving since the turn of the 19th century.”

And progressive churches such as Riverside Church (Rev. Dr. Butler’s congregation) participates in progressive/union activities such as the March for Justice Rally which contain many of the same communist/socialist organizations who marched last year in Ferguson, MO and New York City.  These churches are supported by shadow groups such as the SEIU, CAIR, LaRaza groups and George Soros-backed agencies. When you look at the list of organizations represented by these churches you will begin to see that this denomination that Barack Obama abides by are basically aligned with his upbringing of communist and socialism ideology.

This would explain why Al Sharpton was also in attendance at this prayer breakfast because his group, National Action Network, is also one of the partners of the March for Justice progressive churches like Riverside is promoting. All of this combined gives us a much clearer picture of why Obama’s remarks were so well received at the prayer breakfast.