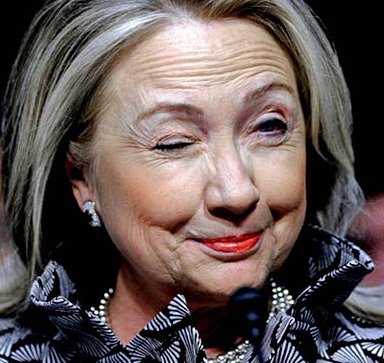 There are the always two sides to every story except in politics where we now seem to have three. We have the Right side the Left side and then there is the Blind side. There is nothing more dangerous to America right now than this blind sense of loyalty to a candidate where facts are overlooked as the cult of personality is allowed to trump all. This is true for both parties today however to the Right sides dismay nobody can play this game better than the Liberal Left. Perfect example: Enter Hillary Clinton as we are told over and over again it is “time” for a woman President. “It is Hillary’s time.”

Once again the behavior of the Clintons makes headlines that should be career ending for Hillary and her womanizing husband Bill, this time through a new book coming out titled, “Clinton Cash” which reveals the hundreds of millions of dollars that the Clintons have raked into The Clinton Foundation by foreign Nations. Immediately the first question I had was why would foreign countries have such an interest in seeing the Clintons back in the White House? Then as a woman I have to ask why would Hillary the self-proclaimed “Champion” of women have a donor relationship with Nations that are well known for the oppression of women?

And then enter the media, AKA damage control. It is truly sad that we cannot even get honest answers to the questions that should be asked of the people that want to be put in charge of our lives and those that we love. The media should be all about truth and scrutinizing such questions regardless of who the story is exposing, instead we get brush offs and deflections artfully done as only our media can do when it comes to the sacred cows on the left. An article in The Washington Free Beacon, allows us to see how NBC reporter Tina Brown, an avid Clinton supporter cannot necessarily defend Hillary’s move when confronted with this information yet cannot bring herself to call Hillary out on it simply minimizing the story and saying Hillary needs to separate herself from the foundation as if Hillary was not a party to her own foundations questionable behaviors. Maybe it was all Bill I mean after all we do know his track record with the ladies. Just look anywhere but at Hillary.

From there this new book sends the media into full defense mode by putting it out there that the controversial expose of the Clinton Foundations dubious donor situation is questionable as to its reliability. Why you might ask? The why is because the author, Peter Schweizer is a conservative of course! Schweizer works for the conservative Hoover Institution, written for Breitbart’s website, (a red flag to the main stream media right there!), president of the Government Accountability Institute and has consulted on speeches for G.W. Bush and Sarah Palin. You can’t get more dangerous and unreliable in the eyes of the left if you are associated with such women as Palin. Talk about creating unfounded blind hatred by the left as they attacked the person not the facts when it came to both Sarah Palin and G.W. Bush.

Oh the sad irony of women who want so desperately to do the right thing believing that by supporting Hillary Clintons bid for the White House they are taking a stand for women’s issues. These women are being led to believe that this woman will help advance us into a new and enlightened era where the “War on Women” will finally be dealt with. Yet these very same women are willing to turn a blind eye to her blatant lies and sins against all of humanity simply because of her gender. As a member of the female species I find this insulting to say the least!

This cannot be Hillary’s time; it can never be Hillary’s time. It is however past the time in our history for women to stop and face facts objectively. Stop letting the media use our hearts to get to our heads, building up false personas to lead us to the promised land of equality. The liberals along with their slobbering sidekicks, aka the main stream media, push their disdain filled, slick Madison Avenue created agenda onto women daily in the name of “being on our side”. As Conservative women we need to deliver the message that it is a huge mistake to think that where women voters are concerned our large hearts equal small brains.

Arizona Politichick Suzanne Sharer is a mom, successful Real Estate agent, businesswoman and political commentator. She was born and raised in Arizona conservatism that turned into a passion at an early age. One of her favorite things as a child was to listen to political conversations between her parents and grandparents around the dinner table. Suzanne continued to carry her passion for America into every area of her life including the work place where she could always find a soap box to be heard from. When Facebook came onto the scene it was only natural for her to use this medium to keep family and friends educated on the American political scene and explain why governmental issues should matter to them. Suzanne has become known for her conservative political commentary and is involved locally in women's leadership groups and the Arizona GOP scene. Suzanne made appearances and blogged on local and National conservative radio shows. You can Follow Suzanne on twitter @blondeandsmart, her facebook pages and her website Blondeandsmart.com is coming soon.