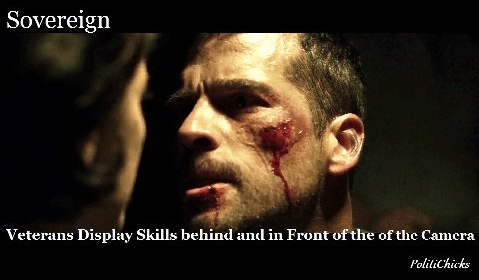 “As long as I’m not forsaken.”

It’s said that life imitates art, but art often depicts the realities of politically driven agendas and those who are most impacted.

The short film, Sovereign, is a little under 18 minutes long.  It was written, directed and produced by military veterans and largely because of this, it is an excellent film.  (However because of the graphic nature, it is for mature audiences only.)

The quote above is from a character in the film, but it could be attributed to any Veteran or active duty service member. Jack Hartnett who co-wrote the film with Scott Levy, both Marine Veterans, dedicated the movie to the Heroes of Benghazi. According to Scott,

“The films’ inception had occurred at the end of 2012, around the same time as the tragedy in Benghazi. We wanted to create a tribute to the lives lost and also shine a light on the failed “leadership” at the highest levels of the United States Government.”

Scott explained that Benghazi was and is “an issue which has only become more relevant, crucial and pressing; particularly with the recent announcement by the former Secretary of State, Hillary Clinton, of her candidacy for the office of President of the United States, the Commander-in-Chief of our Armed Forces.”

Sovereign is about an Iraq war veteran “turned mercenary (who) stumbles upon a plot to sabotage America’s energy independence. Fighting to free the demons in his head, he sets out to eradicate the traitors amongst us.”

There are some very powerful scenes in the film. I asked Scott about one particularly graphic scene and how hard it was to act it out. He said that it was extremely and emotionally difficult. “Knowing that real people have been in that situation before,” he says, “and someone might be in it right now, it’s very disturbing to contemplate. It was very important that we get it right in order to honor them.”

Many Americans may not understand about some of the issues and find some of the scenes disturbing. While being a fictional story, flashbacks, Veteran suicide and PTSD which many are struggling with is addressed in the film. Scott explained,

“We’re using fiction to expose truths and lies. Everything that happens in Sovereign is in some way directly related to current events happening in our world right now. Twenty two veterans a day are taking their own lives… We’re trying to cut through apathy and that is a tall order.”

With the success of the short film; they’ve turned their efforts towards making Sovereign into a full length feature film. “It’s not much different regarding what’s involved from a short to a feature,” Scott says. “It’s basically the exact same process, just tripled, quadrupled, etc. work-wise and usually insanely more expensive depending on the budget. The general rule of thumb is: You can have it good, cheap or fast. Pick two.”

While it’s not always possible to have the same people working on each film project, Scott is hoping many of the same people will be able to work on the full feature. “I think we have some amazing performances in the film,” he says. Frank Jones, who played the CIA Deputy Director, passed away while the movie was in post-production. While he will be missed and others may have other projects, Scott added that he is “excited to see what the new cast members can bring to the table and add to the creative mix.”

Thirty three military veterans made up the cast and crew, which is nearly half the production staff. Scott said there were two motivational factors in creating Sovereign:

“First, making a film that could show Hollywood and the world that there are a lot of military veterans that are very talented in front of and behind the camera and that they have more to offer the entertainment business than special ability extra work. The second reason and maybe more importantly is that being Marines, Jack and I have a lot to say about the state of affairs in this country.”

While both Jack Hartnett and Scott are Marine veterans, they didn’t know each other until after their service when they met in Hollywood. Jack served as a Marine Corps Captain and was deployed during Operation Desert Storm as well as Operation Restore Hope in Somalia.

Scott joined the Marines as soon as he graduated high school in 1990 because he “needed what the Marine Corps was selling,” due to what he called a “pretty tumultuous adolescence.”

As the rhetoric from Iraqi dictator Saddam Hussein was being reported daily, it was clear to many that war would be inevitable. Scott wanted to go if that happened, “I didn’t want to miss out. Unfortunately, the war ended before I was finished training and I missed it.”

I asked Scott about his interest in the Marines and in the film industry and which came first:

“I’d always been enamored of the Marines Corps through reading history, media depiction… but it seemed like such a difficult undertaking. I felt the same way about a career in the arts, I’d always been creative but it seemed unlikely that I could make a living at it. After I got out of the Marines, I figured if I could do that, I could do anything. So I pursued my dream of working in the entertainment industry.”

He’s worked as an actor on such projects as Sniper: Inside the Crosshairs, acting the part of Marine Sniper, LCpl. Chuck Mawhinney, who along with Carlos Hancock are two of the most lethal Marine snipers of all time. (The History Channel still airs the movie; check local listings.)

Scott also worked on the band Linkin Park’s Castle of Glass music video, acting the part of a Navy SEAL. He looks at each character as if they are a real person whether they are or not.

As for the short film Sovereign, all of the actors from the film have the same ethic and dedication. The characters as well as the story are excellent and well portrayed. Sovereign took 2 ½ years to finish and according to Scott was “absolutely a labor of love.”

Oregon Politics: Nepotism, A Resigned Governor, and An Ambitious Girlfriend