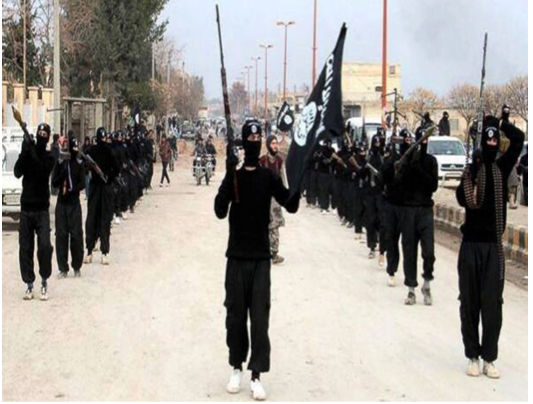 We can all remember when President Obama dismissed ISIS (Islamic State) as just “jayvee” last winter.

But for a “junior varsity” team, this spawn of al qaeda has already slaughtered innocents by the thousands, enslaved hundreds of young women, indulged itself in multiple beheadings, destroyed many ancient city ruins, and has been raking in millions of dollars each day (by selling oil from fields its taken over in Iraq). Not to mention the fact that it has been using social media to expand its terrorist tentacles exponentially across the globe.

Now, it looks like the little “JV team” is trying to advance itself to “varsity” as we are also learning that it is setting up terror training camps in Northern Africa, and has already taken control of several private airstrips in Libya.

According to Fox New Insider:

There are growing concerns that ISIS has made headway in Libya amid confirmed reports that the group has multiple terror training camps in the country.

Catherine Herridge reported on “America’s Newsroom” that ISIS has expanded its footprint in North Africa. She said that U.S. and Libyan officials confirmed that the terrorist organization has more than a dozen training sites.

“ISIS in Libya is now blamed for at least 19 other plots, with U.S. officials acknowledging the group wants to use Libya as a springboard for attacks on neighboring countries and Europe,” Herridge said.

She reported that “Libyan officials say ISIS has taken control of a half-dozen private airstrips in eastern Libya,” many of which are connected to oil refineries.

“ISIS has been very dynamic and very adaptable,” Ali Al-Ahmed, director of the Institute for Gulf Affairs, previously told Fox News. “And its capacity to gain territory and resources and fighting force shows that it’s much more dangerous. Maybe 10 times more dangerous than al Qaeda.”

Herridge said that a Libyan government official told Fox News that they are concerned that ISIS could use the airstrips to launch attacks using small aircrafts loaded with explosives.

She stated that Libya has become a “safe haven” for ISIS.

And if this isn’t bad enough, we are now also learning that ISIS is getting even closer to home. Our home. As in: The United States of America. Near Texas.

ISIS is operating a camp just a few miles from El Paso, Texas, according to Judicial Watch sources that include a Mexican Army field grade officer and a Mexican Federal Police Inspector.

The exact location where the terrorist group has established its base is around eight miles from the U.S. border in an area known as “Anapra” situated just west of Ciudad Juárez in the Mexican state of Chihuahua. Another ISIS cell to the west of Ciudad Juárez, in Puerto Palomas, targets the New Mexico towns of Columbus and Deming for easy access to the United States, the same knowledgeable sources confirm.

During the course of a joint operation last week, Mexican Army and federal law enforcement officials discovered documents in Arabic and Urdu, as well as “plans” of Fort Bliss – the sprawling military installation that houses the US Army’s 1st Armored Division. Muslim prayer rugs were recovered with the documents during the operation.

Law enforcement and intelligence sources report the area around Anapra is dominated by the Vicente Carrillo Fuentes Cartel (“Juárez Cartel”), La Línea (the enforcement arm of the cartel) and the Barrio Azteca (a gang originally formed in the jails of El Paso). Cartel control of the Anapra area make it an extremely dangerous and hostile operating environment for Mexican Army and Federal Police operations.

According to these same sources, “coyotes” engaged in human smuggling – and working for Juárez Cartel – help move ISIS terrorists through the desert and across the border between Santa Teresa and Sunland Park, New Mexico. To the east of El Paso and Ciudad Juárez, cartel-backed “coyotes” are also smuggling ISIS terrorists through the porous border between Acala and Fort Hancock, Texas. These specific areas were targeted for exploitation by ISIS because of their understaffed municipal and county police forces, and the relative safe-havens the areas provide for the unchecked large-scale drug smuggling that was already ongoing.

Mexican intelligence sources report that ISIS intends to exploit the railways and airport facilities in the vicinity of Santa Teresa, NM (a US port-of-entry). The sources also say that ISIS has “spotters” located in the East Potrillo Mountains of New Mexico (largely managed by the Bureau of Land Management) to assist with terrorist border crossing operations. ISIS is conducting reconnaissance of regional universities; the White Sands Missile Range; government facilities in Alamogordo, NM; Ft. Bliss; and the electrical power facilities near Anapra and Chaparral, NM.

Lest we forget that ISIS wants nothing more than to spread its Islamic caliphate worldwide. And the only way for the network to make this possible– is to create utter chaos through bloodshed and destruction. In order to fulfill its endgame, ISIS must terrorize citizens EVERYWHERE, including the U.S.

So, if this isn’t a good reason to secure the DAMN border, I don’t know what is.

Free Health Care and the Road to Involuntary Euthanasia