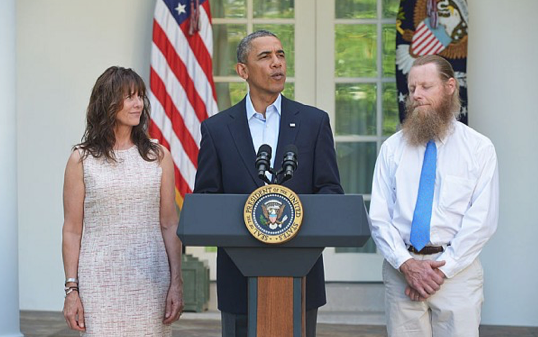 Remember that proud moment in the Rose Garden when President Obama announced the recovery of Sgt. Bowe Bergdahl? It was quite a celebration, indeed (well, at least for those five Taliban terrorists being released).

Remember when the administration touted how Bergdahl served in the military with ‘honor and distinction’? What a joke that statement turned out to be.

Bowe Bergdahl must have been quite an asset in order for President Obama to trade five Taliban commanders (who are very likely to return to terrorism) for him.

Even though the military has charged Bergdahl with desertion.

And not only did Bergdahl desert, he actually intended on going to the other side with a deliberate plan.

“A 2009 NCIS investigation into Sgt. Bowe Bergdahl’s activities while in Afghanistan reveal that there is clear evidence Bergdahl was “going over to the other side with a deliberate plan,” Lt. Col. Anthony Shaffer said on Fox News’ “The O’Reilly Factor” Monday night.

“Clearly he was not all there relating to what he was doing,” Shaffer told O’Reilly. “I think we’re going to see more and more, as this report is made public that there were a number of disconcerting things within Bergdahl.”

According to the sources, data collection at the time indicated Bergdahl made contact with an Afghan in an effort to lay the groundwork for his departure.

“He had Afghan contacts and he was actually trying to offer himself up with the Taliban. Both are very severe,” Shaffer added.

Shaffer said that the NCIS investigation, which included interviews with squad mates as well as Afghans working outside the wire, reportedly resulted in Bergdahl being charged with misbehavior toward the enemy.

Officials say Bergdahl, who was charged with desertion in March, walked away from his post in Afghanistan and was captured by the Taliban. He was then released from Taliban control in a prisoner exchange last May for five Taliban commanders.”

After President Obama bungled this horrible trade for Bergdahl, should we seriously trust him in his deal with Iran?