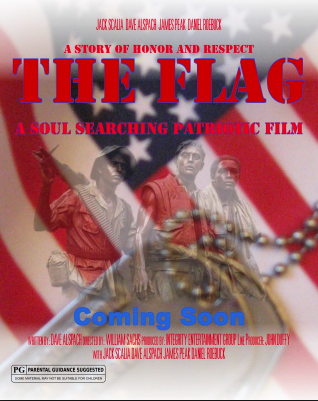 The GI Film Festival is an annual weeklong event which brings the American Film industry, our military and members of Congress together for a chance to honor our men and women in uniform and our Veterans through films.

According to GI Film Festival co-founder and President, Brandon Millet, their mission “is to foster a positive image for men and women in uniform and to connect service members to society.”

The non-profit organization was started by Brandon Millet and his wife, Laura Law-Millett, a West Point graduate and retired Army Major. They realized that there were not many accurate or positive films about the military and wanted to change that.

The festival’s founders have called it “Sundance for the troops.” In this, their 9th year, the festival will have more than 60 military-themed shorts and full featured films to screen from May 18-24 around the Washington, D.C., area.

One such short which will be shown is “The Flag” directed by John Duffy. I had a chance to ask him about the film, the story and about some of his other ventures.

John has been line producing and producing films for over 20 years. The film, The Flag, written by U.S. Special Forces Veteran Dave Alspach, is John’s first time directing.

“Dave was a friend that I knew in the industry and he asked me to line produce his project. When the director dropped out a week before shooting I stepped up and directed it. We turned it into 2 short films, one a fictional one and one an educational one.”

Dave Alspach is also the lead in the short fictional film. The film according to John was “made possible by the military program at Los Angeles Film School and the many military vets who donated their time and worked as crew on the film.”

Dave was the Executive Producer and Army Veteran George Ohan also helped produce it. I asked John what impressed him the most about Dave’s story and about Dave the person.

“The story was based on a true experience Dave had as a Vietnam Veteran coming across some college students attempting to burn the American Flag and he took action and intervened. It’s an emotional story. Dave served in the Army Special Forces during the Vietnam War and has a fascinating career and today in an actor. He is an authentic patriotic person and a great friend.”

A story such as The Flag would be bound to make people think about how actions can affect others. When asked about what he’d like viewers to come away with from watching the film, John replied that he’d like people to have a chance to put themselves in the shoes of military men and women who have served. “(They) risked their lives and have seen friends lose their lives to defend our Country, our freedom and the symbol of that our Flag.”

As for younger viewers, John says it depends on their views and ideologies.

“We have a character in the film that plays a student who sees things from the Veteran’s point of view at the end,” says John.  “He was played by an active duty Navy man Ricky Ryba. Like a line from the film, ‘you have a right to protest but respect those who served and what the Flag means to them.’”

The Flag is John’s first film to be shown at the GI Film Festival, and since it’s his first time directing it’s understandable that he is honored and proud to be a part of the 2015 Festival.

John is not a military Veteran but his father, an Irish immigrant, served in the U.S. Army during World War II. When I asked him how he came to be interested in working with veteran organizations and with Vets in the film industry, he explained, “First I line produced 2 training videos for the US Marine Corps. Then I was asked by a friend to cofound a non-profit, ‘Vets on Set’ whose mission was to help veterans get jobs in the film and television industries. I hired military veterans on a couple of my feature films.”

“Vet’s on Set” is no longer active, but he told me about the nonprofit VFT Veterans in Film and Television which is the main organization in Hollywood for military Veterans.

Created and operated by veterans, VFT “makes it simple and easy for the film & television industry to connect with the veteran community… It is a resource for the film/TV industry to find and hire veterans. It is also an organization for veterans who work, or aspire to work, in film/TV to interact with, support, and learn from each other.”

I had a chance to ask John what he’ll be working on next. He will be helping Cinematographer and Navy reservist Mark August coordinate 2 days’ worth of training on becoming a PA and breaking into the industry for military vets at Sony Studios in June. He is also working on raising financing for a film based on a true story entitled “They Call Me Termite.”

My interest piqued as he described that the film about a “boxer from Texas who went to Iraq as an exterminator during the war and went on to train Iraqi boxers and take them to the Olympics.”

I hope folks who may be near the D.C. area next month will be able to go check out many of the films showing during the GI Film Festival. Be sure to see The Flag while you’re there, and keep watch for more movies that not only portray heroes, but are also produced and directed by them.

Jeb Bush At FITN: "I don’t see any coronations coming my way"