That’s right. All humans. Not only #BlackLivesMatter. ALL HUMAN LIVES MATTER.

The same people pushing the “race narrative” are the same people who support abortion, wherein at least one human ALWAYS dies. It’s ironic in a way; the woman behind Planned Parenthood, the leading abortion provider in the U.S., originally started it as a way to eliminate the black population. That’s right, Margarat Sanger created PP to dispose of black lives. I guess #BlackLivesDidntMatter to Sanger.

I know there are many different views on this subject. All of a sudden whenever a black person dies, if a white guy is anywhere near it, the headline screams, “White Person Kills Black Person.”

I know that teachers coming out of the progressive teaching colleges are being brainwashed into believing that white people are the only ones who can be racist, black people simply cannot be racist and here in Oregon we have the Oregon Center for Educational Equity where teachers all across the state are given materials that tell them white folks have a “white conscience” (bad), a “white culture” (bad) and “white privilege,” possibly the most egregious sin perpetrated by white people…just for being white.

Really, if you didn’t read that article, click on the above link. It’s horrific. 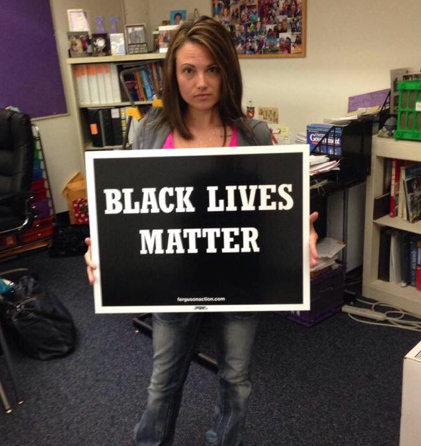 I just came across some disturbing pictures featured here about some white teachers at a St. Louis suburb school district promoting that very same racism, only against their very own race.

Why are there so many rabid white folks willing to hate their own race, by the way? I don’t understand it, but that may be because of my “white privilege” or something.

I can’t really say it any better than this author who sums it up nicely in one paragraph:

“Meanwhile, blacks are really the ones who need to be told that lives matter:  The rates of infanticide, mayhem, and murder among the black population, done by blacks to other blacks, and by blacks to those of other races, calls for a messaging campaign directed not at white society and police, but at those who are lying the most about it all, doing the worst violence, and suffering/dying the most.” 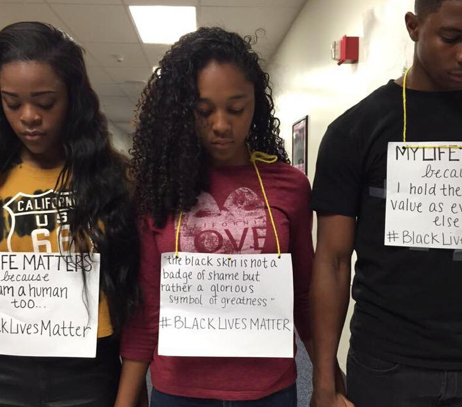 The sign the young woman is wearing could also read: White skin should not be a mark of shame and used as a cudgel to disenfranchise the black youth and tell them they are victims.

When I see the same thing happening with black teachers holding signs that say White Lives Matter then I will stop calling this racism. Because, to me, that is what this is, plain and simple.

Do black lives matter? Absolutely. Do white lives matter? Yes. All HUMAN lives matter. All. Quit trying to divide us by race. We are all part of the same one: The Human Race.

Daniel Greenfield: The Deconstruction of Marriage

American Sovereignty Threatened by the Enemies Within