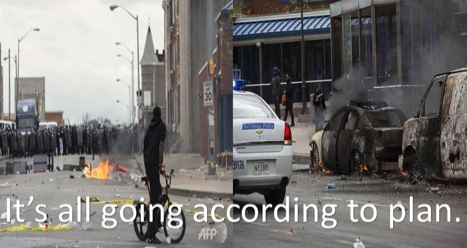 You can hardly miss a day or a week without news breaking of some major racial tension being set off in America. What was once regarded as a nation that had overcome much of what Dr. Martin Luther King Jr. fought to overcome, now seems to have succumb to forces from within, hell bent on destroying all that our Nation represents.

Many have questioned how a city like Baltimore, with a Black Female Mayor, a Black Police Commissioner, and a force made up of more minorities than whites, could have a racial problem. Then they have pointed out that the United States has just had a Black Attorney General for six years and he has been replaced by a Black female Attorney General…both of whom serve or served, at the pleasure of a Black U.S. President. Dr. Martin Luther King Jr. would be speechless at such an accomplishment and he would be crushed, at the current behavior from those leaders.

Another common question has been what does Obama believe? Is he really Christian, is he a Muslim, is he a communist, etc.? The only thing Obama has openly and repeatedly admitted to being and then demonstrated being, is a Community Organizer. So, what is a community organizer? Well, let’s look at the man who invented this position and defined it so well that Hillary Clinton wrote her graduate thesis on the man.

In his book, Rules for Radicals, Saul Alinsky says of community organizers,

“He detests dogma, defies any finite definition of morality, rebels against any repression of a free, open search for ideas no matter where they may lead. He is challenging, insulting, agitating, discrediting. He stirs unrest.” (p.73)

I would say this is an accurate picture of Barack Obama and other community organizers…Al Sharpton, for example. Certainly explains Obama’s flip flop on marriage.

Alinsky also taught that, “The organizer’s job is to inseminate an invitation for himself, to agitate, introduce ideas, get people pregnant with HOPE and a desire for CHANGE…”(p.103). Still not understanding how Obama has presided over the most racially divided nation since the before the Civil Rights Era? Here’s another nugget of explanation from Alinsky, “An organizer must stir up dissatisfaction and discontent; provide a channel into which people can angrily pour their frustrations” (p.117). I don’t need to point out this is likely where Obama got his slogan!

Curious as to why Obama’s Justice Department seems constantly on the attack against other law enforcement agencies? Busy investigating others when they, the DOJ, should be the one under the microscope. Well, Alinsky explains why this is an important tactic for community organizers like Obama. “Since the HAVES publicly pose as the custodians of responsibility, morality, law, and justice, (the tax payers, law enforcement, business owners, etc.) they can be constantly pushed to live up to their own book of morality and regulations. No organization, including organized religion, can live up to the letter of its own book. You can club them to death with their ‘book’ of rules and regulations”(p.152).

The last note I’ll make reminds me of something in the book The Kindergarden of Eden: How the Modern Liberal Thinks by Evan Sayet. Sayet explains in his 2nd law of the modern liberal that, “Indiscriminateness of thought does not lead to indiscriminateness of policies. It leads to siding only and always with the lesser over the better, the wrong over the right, and the evil over the good.” Now take a look at what Alinsky says Obama should do as community organizer:

“The organizer should know and accept that the right reason is only introduced as a moral rationalization after the right end has been achieved, although it may have been achieved for the wrong reason—therefore he should search for and use the wrong reasons to achieve the right goals. He should be able, with skill and calculation, to use irrationality in his attempts to progress toward a rational world.”

So, in summary, all that we see happening across the cities and states in the U.S. is going exactly as planned. Obama promised change and he knows a central tenet of community organizing, “All change means disorganization of the old and organization of the new” (Alinsky, p.116).

Finally, a warning for those of us who are the enemies of community organizers: “The real action is the enemy’s reaction. The enemy properly goaded and guided in his reaction will be your major strength” (p. 136).

Don’t be goaded or guided into being their major strength.

Minutemen: Continuing to Serve With Strength And Honor