If you believe Hillary Clinton, her email scandal happened because she couldn’t figure out how to do what every American of working age knows how to do; juggle a work and personal email account. 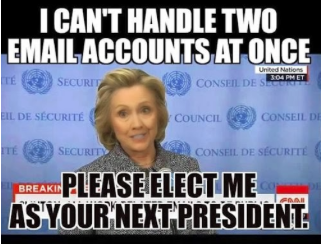 The Clinton vaporware bridge to the 21st century turned out to be a private email server that kept out the media, but not foreign spy agencies. When Hillary finally had to turn over some emails, she printed out tens of thousands of pages of them as if this were still the 20th century.

But like the rest of her party, Hillary is very much a 20th century regulator, not a 21st century innovator.

Despite claiming to have invented the internet, the Democratic Party isn’t very good at technology and doesn’t like technology. Everything from the Healthcare.gov debacle to the VA death lists happened because this administration was completely incompetent when it came to implementing anything more complicated than a hashtag. The success rate for exchanges managed by its state allies isn’t much better. The only databases it seems able to handle are for its incessant election fundraising emails.

Democrats not only didn’t invent the internet, but they’ve been trying to kill it ever since it existed. The latest attempt to hijack the internet under the guise of net neutrality follows multiple attempts to implement CDA laws censoring it back in the Clinton days. Obama’s rhetoric over reclassifying the internet is a carbon copy of Clinton’s own rhetoric over the Telecommunications Act.

Obama and Clinton are not innovators, at best they’re marketers, at heart they’re regulators. They don’t want ‘open’ anything. Regulators seek to define and classify everything before freezing it into place. It’s the same control freak impulse at the heart of Hillary’s private email server. They want to enforce a comprehensive ruleset without regard to functionality that privileges their own communications.

It’s a short leap from Hillary’s private email server to Obama’s private internet. Both want their own communications to be unseen, witness the way that the White House deals with Freedom of Information requests, but they want oversight of what everyone else can and does say online.

Innovators disrupt. Regulators control. The left’s hysteria over companies like Uber and Airbnb is typical of the regulator mentality. The left’s propaganda operations have boomed thanks to the internet, but rather than celebrating open technology, it responds by trying to closely regulate the internet instead.

The American left understands that it cannot market itself as progressive without embracing technology, but culturally it is a reactionary movement whose embrace of organic food, no vaccines and paranoia about technology causing Global Warming reveals a deep unease about the technology it claims to love.

Democrats like technology the way that they like science in general, as an inspiring progressive idea, not as the messy uncertain reality that it really is. But applying their logic of “settled science”, in which a thing is assumed to work because their ideology says it should, to technology leads to disaster. Technology is a real life test of ideas. Its science is only settled when it can be objectively said to work. Healthcare.gov was an example of the GIGO principle that governs information technology and life.

If you put garbage in, your output will be garbage. ObamaCare was a garbage law. The policies it offers are garbage and its website, produced through the same corrupt and dysfunctional processes as the rest of it, was also garbage. The left has to deny that its productive output is garbage because recognizing that would mean having to admit that its ideological input was garbage. 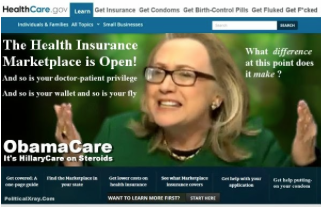 If you try to set up a website for a law whose actual functioning no one understood designed in part by bureaucrats who were better at writing mandates than making things that work and by an assortment of corporations that got the job because of who their executives knew in the White House, the other end was bound to be a giant pile of garbage that worked as well as the law it was based on.

Garbage in, garbage out.

Obama wasted billions on Green Energy because his people couldn’t be bothered to examine the vested claims of special interests. His people insisted that Ebola wasn’t an infectious disease because that would interfere with immigration policy. Science and technology don’t come first. They’re just there to serve the same empty marketing function as the ‘smart’ part of his smart power which led to ISIS.

Green Energy and ObamaCare had to work because they were shiny and progressive. The messy reality of the technology or the business models for making them work didn’t matter to Obama.

Progressives mistake this brand of ignorant technophilia for being on the side of progress, when really it’s just the flip side of technophobia. The technophobe raised in a push button world in which things just work doesn’t necessarily fear technology; instead he fears the messy details that interfere with his need for instant gratification.

The new lefty Luddite loves gadgets; he just hates the limitations that make them work. He wants results without effort or error. He wants energy without pollution, consensus without experiment and products without industry. The same narcissism that causes him to reject the fact that he has to give something to get something in human affairs leads him to also reject the same principle in technology.

He wants everything his way. He thinks that makes him an innovator, when it actually makes him a regulator. Innovators understand that every effort comes with risk. Regulators seek to eliminate risk by killing innovation. The progressive Luddite believes that he can have innovation without risk. But that’s just the classic progressive fallacy of confusing regulation with innovation and control with results.

Selling regulation as innovation is just marketing. And that’s all that progressives like Obama are. Their openness is pure marketing. Their need to control everything is the regulatory reality underneath. 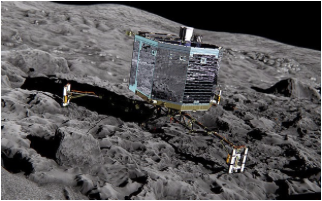 The innovator knows that reality is messy. He lands a probe on a comet while wearing a tacky shirt. The regulator however can only see the shirt. Technology only interests him as a means of controlling people. The shirt matters as much as the comet because both are ways of influencing people.

To the left, skill and ingenuity are just forms of unchecked privilege. The only achievement that matters is power over people. The revolutionary exploits technology, but his revolution is that of the regulator, his machine is collective; its ultimate design is to end ingenuity and abort progress. His communication is not a dialogue, it is a diatribe, and his vision of the internet is only meant to be open until he can close it.

The technological vision of the Democrats is just the same old central planning in a shinier case.

Who Will Defend Religious Freedom?