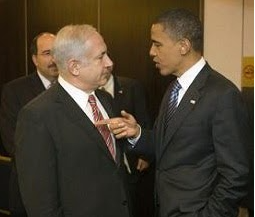 Its latest kick and shriek had White House Chief of Staff Denis McDonough sidling into the toxic atmosphere at the D.C. conference for the anti-Israel lobby J-Street to berate Netanyahu.

In attendance at the conference were such luminaries as Saeb Erakat, the PLO negotiator who had called Netanyahu a “filthy war criminal” and claimed that Hamas is “a political, not a terrorist movement.”

Also featured was Nabila Espanioly of Hadash, formerly the Israeli Communist Party. Nabila, a former Communist activist who had accused Israel of “State Terrorism”, told J Street about the need to fight “against fascism and against racism inside Israel.”

Other notables included Maha Mehanna, who had called Israel’s war against Hamas a “crime against humanity”, Peter Beinart, who wanted Obama to punish Israel and freeze the assets of its Minister of the Economy, and Matt Duss, who once compared Israel’s blockade of Hamas in Gaza to “segregation in the American South.”

The comparison would have been on the nose if it had been the KKK being segregated.

Finally there was James Baker, the former Secretary of State and senior partner for the law firm the Saudis hired to defend themselves against lawsuits from 9/11 victims, who had famously said, “F___ the Jews. They don’t vote for us anyway.”

Denis McDonough’s appearance at the J Street hatefest could be taken as, “F___ the Jews, they’ll vote for us anyway.”

The dead-eyed McDonough threw the rabid anti-Israel audience its red meat by warning that, “An occupation that has lasted for almost 50 years must end.”

He continued the administration’s pretense of being offended by Netanyahu’s election rhetoric about the absence of any partner for peace to create a Palestinian state with, insisting that “We cannot simply pretend that those comments were never made, or that they don’t raise questions about the Prime Minister’s commitment to achieving peace through direct negotiations.”

Netanyahu made his commitment to peace clear when he agreed to release 104 terrorists, some of whom had murdered children, as a precondition demanded by PLO leader Mahmoud Abbas. Abbas sabotaged the Kerry attempt to start negotiations anyway and Kerry predictably blamed Israel. But that’s part of the administration’s consistent position that Israel is always wrong.

Obama’s people are still complaining about Netanyahu’s election comments and his breach of protocol in addressing Congress. But what are Israelis supposed to make of Obama’s Chief of Staff addressing a conference that featured apologists for Hamas and supporters of boycotting Israel?

What message does it send when the White House Chief of Staff attacks the Prime Minister of Israel at an event featuring enemies of Israel? Barack Obama is certainly no stickler for integrity in election rhetoric. 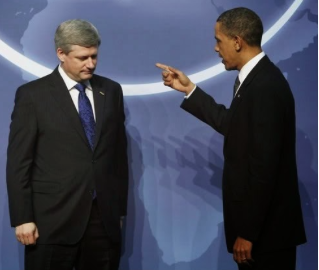 When he first ran for the White House, he appeared at AIPAC and vowed that, “Jerusalem will remain the capital of Israel, and it must remain undivided.”

Once in office, Obama berated Israel for building “settlements” in Jerusalem, one of the oldest cities in the world. Last year his spokesman claimed that building in Jerusalem would distance Israel from “even its closest allies.”

At AIPAC he had told the audience that, “There is no greater threat to Israel — or to the peace and stability of the region — than Iran. Now this audience is made up of both Republicans and Democrats, and the enemies of Israel should have no doubt that, regardless of party, Americans stand shoulder to shoulder in our commitment to Israel’s security.”

Then he went on to push a deal that would let Iran go nuclear while his propagandists denounced Republicans opposed to the sellout as “traitors”. Most recently he had Iran delisted as a terror threat.

Obama’s double standard has been to hold Netanyahu to the most extreme interpretation of his remarks while giving himself a pass. That same pass is also good for Iran and the PLO.

The liberal line on the PLO’s Palestinian Authority and the Iranian regime has been to ignore their rhetoric. No matter how many times the PLO celebrates the murder of Jews and calls for the destruction of Israel; Obama never warns that he is “reassessing” his relationship with the terrorist group.

Iran’s Supreme Leader just said, “Death to America”, but that won’t impact the negotiations. The White House explained that was “intended for a domestic political audience”. When Netanyahu says something during an election that the White House doesn’t like, the fact that it was intended for a domestic audience doesn’t matter. But when Iran’s leader calls for “Death to America”, we can just ignore that because it surely doesn’t reflect his deeper feelings on destroying America.

Terrorist regimes are treated as untrustworthy when it comes to their rhetoric, but absolutely reliable when they negotiate. The same Ayatollah who calls for “Death to America” is supposedly lying to his own people, but his representatives will be absolutely honest when they pledge not to build a bomb. The Palestinian Authority shouldn’t be paid attention to when it calls for destroying Israel, but should be relied on when it signs on the dotted line no matter how many agreements it broke in the past.

When Iran threatens America, it’s just posturing. When the PLO threatens Israel, it’s empty rhetoric. But when they negotiate, suddenly we can trust our lives to the word of these “liars”.

Iran and the PLO benefit from the same double standard that Obama does. We’re not supposed to believe what they say in public, but we’re meant to have faith that they are honest in private.

Netanyahu however gets whacked with the other side of that standard. The same political hack who shamelessly told AIPAC that he supports a united Jerusalem and then even more shamelessly took it back, pretends to be morally outraged that Netanyahu would slam a PLO state during an election.

Either an uncharacteristically modest Obama thinks that Netanyahu is better than him, or he’s being a shameless hypocrite. Given his sordid history, hypocrite is the safest bet.

Obama’s international doubletalk has gotten so bad that John Kerry actually had to tell the Russians to ignore Obama’s public statements about Russia. While Obama can’t “pretend” that Netanyahu’s “comments were never made”, the Russians are supposed to pretend that his comments were never made. The Israelis are supposed to pretend that Obama never said anything about a united Jerusalem. So which comments does Obama really mean? Who knows. 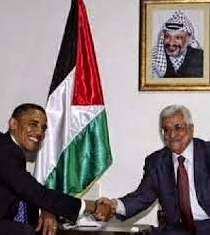 Israel isn’t the barrier to a Palestinian state. The PLO and Hamas can’t even get along long enough to form a state or hold an election. Blaming Netanyahu for actually addressing these facts is the height of cynicism from an administration that until recently avoided investing its energies in peace negotiations because it knew that was a dead end.

Obama doesn’t really believe in a Palestinian state. He’s throwing a two state tantrum because it gives him a convenient angle of attack against Netanyahu. The Israeli election was about either forcing out Netanyahu or isolating him. Having failed at the first, Obama is defaulting back to the second.

This isn’t about peace. It’s about fighting and winning a political war against Netanyahu in order to free Obama to secure his nuclear deal with Iran.

Obama claims that Netanyahu has shown that he is untrustworthy when it comes to peace. Instead he urges us to trust our lives to an Ayatollah who calls for “Death to America”, but doesn’t ‘really’ mean it.

Daniel Greenfield is a New York City based writer and blogger and a Shillman Journalism Fellow of the David Horowitz Freedom Center.  Follow his daily blog Sultan Knish.

Avalanche of Intolerance Unleashed Against Indiana’s People of Faith

ALERT: America Is In REAL Danger (And It's America's Fault)