For thousands of years the Jews dreamed of reclaiming their country. The left had another dream. 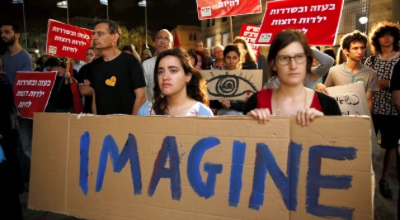 Most of all it dreamed of a country without conservatives. It still hasn’t gotten that wish.

Netanyahu’s victory hit hardest in Tel Aviv where, as Haaretz, the paper of the left, reports, “Leftist, secular Tel Aviv went to sleep last night cautiously optimistic only to wake up this morning in a state of utter and absolute devastation.”

Tel Aviv is ground zero for any Iranian nuclear attack. Its population density makes it an obvious target and Iran threatened it just last month. A nuclear strike on Tel Aviv would not only kill a lot of Israelis, it would also wipe out the country’s left.

Haifa and Tel Aviv are the only major cities in Israel that the left won in this election. And it was a close thing in traditionally “Red Haifa” whose union dockworkers these days are Middle Eastern Jews who vote right. The left took a quarter of the vote in Haifa to a fifth for Netanyahu’s conservative Likud party.

In Tel Aviv however, the Labor coalition and Meretz, the two major leftist parties, took nearly half of the vote. Amos Oz’s daughter told Haaretz that everyone in the left had been upbeat because everyone they knew was voting for the left. Now the leftist elite is once again forced to come to terms with the tragedy that much of the country doesn’t want to hand over land to terrorists, live on a communal farm or turn over the country to Marc Rich’s lawyer and his American backers who make Slim-Fast and KIND bars.

There are however days when they think Israel might be better off without certain parts of Tel Aviv.

The left doesn’t want a country. It wants a Berkeley food co-op. It wants a city with some ugly modernist architecture. It wants a campus with courses on media studies and gender in geography. It wants an arcade where unwashed lefties can tunelessly strum John Lennon songs on their vintage guitars. It wants cafes with Russian Futurist prints on the walls. It wants to be excited about political change. Its only use for Israel was as a utopian theme park.

Its allegiance was not to Jewish history or democracy, but to its crackpot leftist fantasies. Now its fantasies are dead and it wants to kill Israel.

The left spitefully alienated every immigrant group from Holocaust survivors to Middle Eastern Jews to Russian Jews. It also had slurs for each of them. The Holocaust survivors were ‘Sabon’ (soap) and the Middle Eastern Jewish refugees were ‘Chakhchakhim’. That particular slur at an election rally cost Peres and Labor the 1981 election. Another slur at an election rally now hurt the left and boosted Netanyahu. But if you ask the left why it lost, it will blame Israeli racism.

The Israeli left slurred Middle Eastern Jews as “primitives” and used them as cheap labor to maintain the Kibbutz collectivist lifestyle until they stood up for themselves and the experiment in ‘equality’ ended. It slurred Russian immigrants as “prostitutes”, Settlers in ’67 Israel as “bloodsuckers” and Ultra-Orthodox as “parasites”. 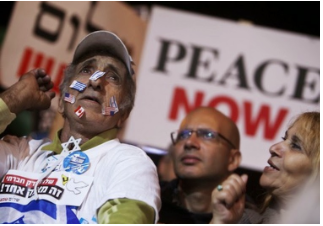 Netanyahu’s likely coalition will lean heavily on parties that draw their support from Middle Eastern Jews, Settlers, Russian Jews and the Ultra-Orthodox.

These groups are also known as the majority of the country. That’s why the left lost. Again.

The left wants its clubhouse back and it can’t get it back. Demographics and immigration turned the ideal Israeli leftist, a wealthy secular Ashkenazi urbanite from an important family, into a minority. The only reason the left still exists is because its phantom Apartheid State of media outlets, courts and academics still maintains a death grip on the system.

The other reason that the Israeli left exists is that its malicious oppression of new immigrants splintered them into warring groups, much as the Democratic Party’s Tammany Hall did in the United States. The left couldn’t own them, but it did set them against each other in order to maintain a dysfunctional political system in which the strongest form of central authority comes from an unelected judiciary.

The real Apartheid State in Israel is this Deep State of the left. It’s the one you see on display when former heads of the Mossad and Shabak denounce Israel and Netanyahu. It’s in the phony media polls and exit polls that were skewed in favor of the left. It’s in the candidacy of a cretin like Herzog with his high voice and his old guard last name promising to do whatever Obama and the left tell him to do. The left tried to sell Herzog, the errand boy for international leftist criminals like Marc Rich and Octav Botnar, as the future of Israel. The public never bought it.

The left has no leadership. It has nothing to offer. It has no reason to exist except malice and spite.

Since the left lost control of Israel, it has been hell-bent on destroying it. The PLO deal was one step in a process meant to destroy Israel and return to the bi-national state that Ahdut HaAvodah, the ancestor of the Labor Party, and Ben Gurion had been flirting with in the twenties and thirties. The Two-State Solution was always meant to end in a One-State Solution.

The Israeli left has despaired of turning the country into the utopia that it wanted. There are still plenty of bureaucrats and union monopolies, but children are raised by their parents and most of them are born to the types of Jews that they hate.

The more philosophical members of the left see the “peace process” that they illegally initiated and passed as a cleanup operation that removes the failed experiment of Israel to make way for the Muslim “decolonization/ethnic cleansing” of Israel. They usually have homes in France and tenure in the US.

And the rest of the Jewish population that doesn’t have homes in France is meant to become Sabon. 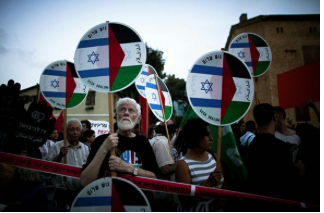 The remainder had decided that the only hope for the leftist dream is to unite with their Socialist comrades in the PLO and build a bi-national state using Muslim demographics to counter the demographic growth of Middle Eastern and Ultra-Orthodox Jews. Israel will become Lebanon. The Jews will become the Lebanese Christian minority in this utopian experiment and it doesn’t matter if they get killed as long as some of them go on living in pricey neighborhoods and strumming guitars in Tel Aviv.

It would be nice to think that the Israeli left was transformed into this twisted thing by the loss of its utopian dreams, but it was always like this. It was never patriotic. It was forced to become patriotic by the Muslim rejection of all its efforts at co-existence. It was never Zionist. Zionism was forced on it by the anti-Semitism of its Russian Socialist colleagues. It never wanted to be Jewish. It was forced to be. Muslim hate turned the Israeli left into the unwilling caretaker of a Jewish State. G-d kept Israel alive despite the left’s incompetence, its treasons and its slavish instinct for appeasement.

Today the left can no longer even pretend that it has a vision. All it can do is howl about peace and justice and how the Middle Eastern Jewish Schorim (blacks) and the Ultra-Orthodox Schorim (also blacks, for their hats) and the Russians destroyed ‘their’ country. Then it can go back to its French villas and have its bi-national Muslim state there.

Where Are You With God & Country?