A few days after September 11 I saw a quote from Gunter Grass on a Manhattan lamppost. In those dark days, the lampposts and walls that weren’t covered in missing persons posters were decorated with the hysterical pamphleteering of the left urging us to blame ourselves for the attacks. The quote has long since been lost to memory, buried under smoke and ash, a green parrot perched on an empty staircase and crowds thronging on foot across the bridge. 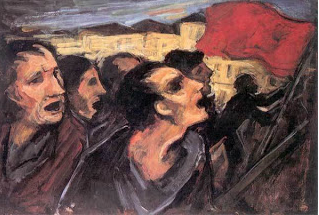 The quote itself, like the latest Grassian screed, does not matter. Grass, like Gandhi and King, was one of the favorite go-to guys for the left’s sticky sheets of paper. When you want to write a suicide note, then you reach for a line from Sylvia Plath or Emily Dickinson, but when you want to write a national or civilizational suicide note, there’s always Gunter Grass.

As a writer, Gunter Grass is a blacksmith, hammering together graceless and shapeless lumps that aren’t good for much except hitting people over the head with leaden angst and guilt.
Being a bad artist or writer, a shameless egotist who hammers his own pedestal and waits for the adoring crowds to gather, does not make one a Nazi, though Gunter had been a Nazi. But it doesn’t help either. Neither does the resentment over the war poorly fitted into a pacifist t-shirt which hangs over the paunches of the German and Japanese left. That adds a vindictive tone to their denunciation of American, British and Israeli warmongering.

Grass, like so much of the German left, saw Nazis everywhere but in the mirror. The only lesson that he and his comrades had drawn is that they were wrong to march right, when they should have marched left. It did not occur to them that they should not have been marching at all and that the marching under red banners was the whole problem to begin with.

On the thirty-first anniversary of Kristallnacht, the progressives of the German terrorist left plotted to bomb a Berlin synagogue where a Kristallnacht commemoration was taking place. They didn’t succeed, but their colleagues on Air France Flight 139 did, staging their own Aktzion, separating the Israelis from the non-Israelis and deciding who would go to the left or to the right.

Bose, the leader of the German Entebbe hijackers, who had told the hostages that he was not a Nazi, just an idealist, had proposed assassinating Nazi hunter Simon Wiesenthal. That plot, like bombing a synagogue’s Kristallnacht commemoration, seemed more like it might be up a Nazi’s alley. Another symptom of how the German left could not help goosestepping right. 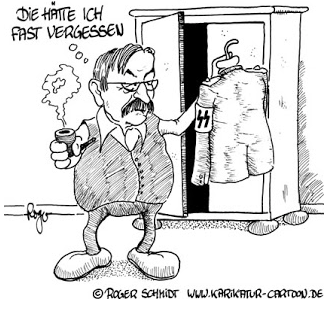 The answer to the conundrum and the unspoken thing that Gunter Grass dared not speak of may lie in a letter from the leader of another German leftist terrorist cell, Dieter Kunzelmann, who while sipping coffee with Muslim terrorists in Jordan, wrote home that, “The German left must overcome its Judenknacks” or hangups about Jews. By this little Dieter did not mean that the German left should stop hating Jews, he meant that it should learn to feel good about hating Jews.

Bombing the synagogue on Kristallnacht would help Germany get rid of its “Vorherrschaft des Judenkomplexes“, he wrote, which means something like the Supremacy of the Jewish Neurosis, Bombing a synagogue would help Germans break through their feelings of guilt and emancipate the German left from feeling any hesitation about killing Jews. The provocateurs of the left who had dedicated themselves to the war against bourgeois hangups about orgies and communal property would help break one more wrongheaded bourgeois taboo. Much like an icon of the German left confessing to having served in the SS and writing a poem that features him working out his own “Judenknacks” right on the page.

Gunter Grass was more of a moderate than Dieter Kunzelmann. Rather than tackling the Judenknacks head on by bombing a synagogue on Kristallnacht or shooting Simon Wiesenthal in the head, he took the hack’s route by treading the well worn ground of spinning the wheel of history until the Jews became the new Nazis. They have uniforms don’t they, and an army and bombs.

Grass volunteered to serve during the war to escape his bourgeois middle-class home like a Peter Pan flying away to a Nazi Neverland. The left’s anti-American andanti-Semitic hiccups have little to do with the red, white and blue or the blue and white, but with how impressive all the speakers are in taking on the Great Satan and the Little Satan. Down with General Electric, down with the A-Bomb, down with the Synagogue. Up with whoever is shouting through a megaphone about boycotting Israeli walnuts or American rockets.

It’s not about the left being Anti-Semitic, it’s about it being socially acceptable for the left to be Anti-Semitic. And it’s about the “courage” of leftists who dare to take on the bourgeois post-Holocaust hangups and switch them around so that the Jews become the Nazis, the Nazis become the Jews and the Mullahs become the Uberjews. The Jews are irrelevant except as a means for the left to rid itself of all rules and morals on the path to total revolutionary commitment.

In Cologne, Muslims wanted to distribute a Koran to every household in the country. But too many are still reading from Das Kapital and Mein Kampf. Like the boat captain in Die Lorelei, they can’t see the cliff, they are too enraptured by the revolutionary songs of the red Lorelei. The Wagnerian thunder of all the old revolutions reborn again out of the dead earth, spotted with the blood of martyrs, the sharp uncompromising red of revolution. 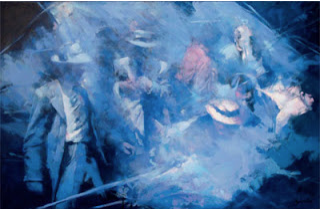 “Raise high the red flags,” the Battle Hymn of National Socialism went, “For German labor we will clear the path to freedom.” Those red flags have not changed much since. The Blutfahne, the blood flag covered in the vital fluids of dead Nazis killed during the Beer Hall Putsch under which Nazis swore in new recruits. Or the red flag of Soviet Union memorializing the blood of the martyrs of revolution. Or the red tulips of the Iranian flag which represent the blood of martyrs.

It’s all the same in the end. Red faces hiding behind red flags. Red Gunter mixing his poison with sugar, closing the circle of his life even as the international left goes back to smashing Jewish windows and crowds gather with megaphones outside Jewish stores. It’s not really about the Jews, it’s about the men and women with megaphones who have spent too long looking in mirrors and waiting for the applause to begin.

It isn’t the size of the stone, it’s the breaking of taboos. And when enough taboos have been broken, then the red flags can freely wave again.