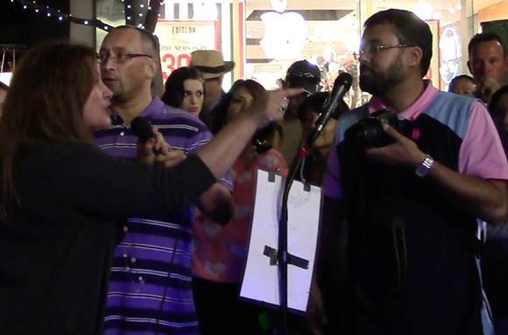 While Islam is waging a bloody battle across the entire world, instead of calling out their atrocities most of the media chooses to punish the people trying to warn the world about Islam.  Freedom Fighters like Robert Spencer, Pamela Geller, and Brigitte Gabriel are continuously denigrated for simply telling the truth.

Regardless of 9/11/01 and 9/11/12, and despite the fact that Americans are being beheaded by ISIS, if you dare suggest that the Islamic State is getting their killing orders directly from the Quran you are called ‘intolerant’ and ‘Islamiphobic’.  Meanwhile, ISIS has been very successful recruiting new followers (including Americans) via social media.

So if no one is allowed to warn people about the violence of Islam, how will we be prepared when they try to accomplish their goal of taking over America (ala Dearborn, Michigan)?

You take it to the streets–and that is exactly what a group called the Counter Jihad Coalition is doing, evangelizing at a popular outdoor mall known as the 3rd Street Promenade in Santa Monica, California.  According to Samira Tamir of the LA chapter of ACT for America, the Promenade has become a very popular shopping area for Muslims in the area with bearded men and women wearing full hijabs–so each weekend, the CJC sets up a table with pamphlets and they tell people about Islam using direct quotes from the Quran.

Of course, their presence isn’t welcome with 3rd Street Muslims.

Dr. Jamie Glazov, who spends many weekends at the Promenade, has been instrumental in bringing attention to the Counter Jihad Coalition’s work.  This episode of The Glazov Gang features CJC’s Louis Lionheart, who was physically attacked by a Muslim woman at the Promenade after telling a crowd that Mohammed, who married a 9-year old, was a pedophile:

Steve Amundson, founder of Counter Jihad Coalition, talks to Jamie about why he began his public outreach, teaching people about Sharia and more:

In this episode, guest-host Nonie Darwish talks to Samira Tamer, L.A. ACT Chapter Leader, about the Islamic Supremacism’s totalitarian presence on the streets of L.A.:

And in this video, Dr. Jamie Glazov is seen quoting directly from the Quran to Muslims who still challenge the “context” of Mohammed’s violent words:

To learn more about the Counter Jihad Coalition’s work, visit their website: http://counterjihadinfo.weebly.com.  And you can watch episodes of the weekly webTV show The Glazov Gang here: http://jamieglazov.com/2014/12/02/video-jamie-glazov-debates-muslims-on-3rd-st-promenade/

And in case you missed it, here is my interview with Dr. Glazov after he appeared on a fiery episode of the Sean Hannity Show: