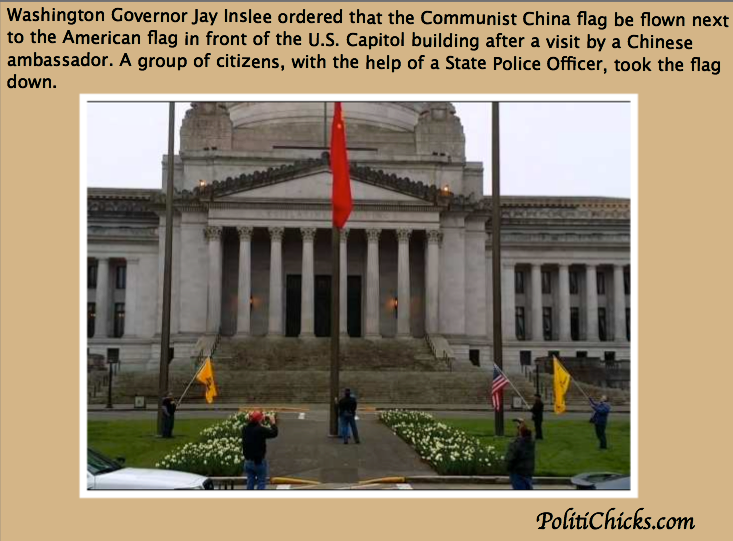 We have a resident in the White House whose own biography tells us that he was raised by Communists, mentored by Communists, and preferred counsel of Communists and Marxists throughout his college years. So unless you believe that he saw the light and had a come to Jesus moment under Rev. Jeremiah Wright, one might conclude that he still believes and is forwarding Communist ideals. His Communist leanings are easy to track if you know what you’re looking for. It’s difficult to imagine ever coming to an “agreement” with an Iranian leader that is screaming “Death to America” and taunting that “the destruction of Israel is not negotiable”–and yet Congress does nothing and America shrugs.

Since our 40 and under crowd are woefully uneducated about what that means (you’ll see why when you read the planks below), just think “tyranny.” Communism is one form of government which eliminates God so that Government becomes ruler of all.  It is somewhat like ISIS where you either accept what the tyrants believe or they destroy your way of life (or they end your life). Everyone works as a slave and is forced to participate in things that they find abhorrent as a form of oppression. It reminds us who is in charge.

Communists have told us for years how they will destroy America and folks, they are way down the path.  Former Soviet Premier Nikita Khrushchev was the dictator who – as all dictators tend to do – intended to rule the world and cause us all to submit to Communism. He didn’t care if this was completed in his lifetime, only that our demise happened eventually.

So has Communism (or whatever the current title is for evil in the world) made its mark? Go back and watch reruns of shows in the 50’s and 60’s and compare them to our world today. Here are some of Khrushchev’s quotes regarding America:

“We will take America without firing a shot … we will bury you!”

“We can’t expect the American people to jump from capitalism to communism, but we can assist their elected leaders in giving them small doses of socialism, until they awaken one day to find that they have communism.”

“I once said, ‘We will bury you,’ and I got into trouble with it. Of course we will not bury you with a shovel. Your own working class will bury you.”

“We do not have to invade the United States, we will destroy you from within.”

Nikita Khrushchev was right and since Obama was placed in our White House we have been racing toward fulfilling the planks from the Communist Manifesto. Americans are perpetuating their own demise on a false premise of moral superiority. Tyranny always has to shove out the hope of Christ in order to succeed and once this happens, we are allowing Communism to take over.
(Video:  Washington Governor Jay Inslee ordered that the Communist flag be flown next to the American flag in front of the U.S. Capitol building.  A group of citizens, aided by a State Police Officer, took that flag down.)

The Communist Manifesto was read into the Congressional record in 1963 to preserve it for the future generations of American people to be warned. This is their plan to weaken and destroy America… or rather how America will destroy herself from within.

Here are a few portions of the Communist Manifesto that jump out as particularly chilling because they are either close to or have already happened in America (entire list provided in the link below):

19. Use student riots to foment public protests against programs or organizations which are under Communist attack. (Side note: The fist in the air is a sign from this era. I see it everywhere now, most recently when students were protesting at Oklahoma University over a student who said something stupid.)

We have a duty to pass on to our children a heritage that is free. What are you doing today that leads to securing our freedom?

Will Bowe Bergdahl Ever Be Convicted With Desertion?