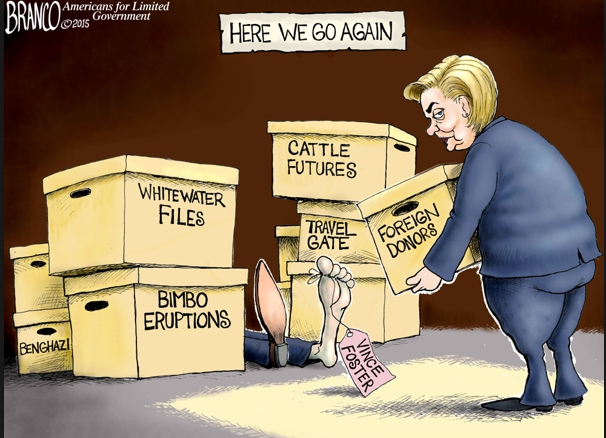 During the Democrat presidential primary debates of 1992, then California Attorney General  Jerry Brown accused then-Arkansas governor Bill Clinton of being involved in a shady real estate business known as the Whitewater Development Corporation. While Clinton was able to sidestep the issue that evening, the tip was given to the press and they began to take a look into the situation. As evidence of crooked deals and illegal land-flipping grew more and more obvious, the liberal-leaning press got less and less curious, especially after Bill Clinton won the 1992 election and began to settle into office.

Whitewater, as the scandal in toto became known, never disappeared completely but the ensuing explanations of events and criminal behavior became so convoluted and involved that most average Americans could barely keep up. But I understood.  From March 1983 through August 1986 I had worked for a savings and loan, so the words used and the documentation published were not confusing to me at all. I immediately recognized illegal check-kiting and the selling and re-selling to straw buyers in order to inflate property value and increase mortgages.  Webb Hubbell, one of Hillary Clinton’s Rose Law Firm partners (and later Deputy Attorney General) used any/all means to facilitate increased loan fees for WDC.

When the Congressional investigations began, Clinton defenders were sent out from all corners of the nation to present mostly hearsay evidence, all expressing the same refrain we have come to know ever since the Clintons came to Washington: Invented charges by Republicans, old news, there is no evidence of any wrong-doing. (Interestingly, there was so little evidence that the pair had to re-file several years’ worth of IRS tax returns to “correct errors” or erase “typos,” and a check was cut for back taxes owed and fees to cover the late discovery of the mistakes. Oopsie…)

With every scandal we saw the same line of action: outright denial followed by accusations of a grand conspiracy by the opposition.  (Much like Hillary’s claims on the “Today” show that her husband’s sessions of oral sex with his intern was “a vast, right-wing conspiracy to take down my husband.”)

Next, minions were sent out to fill the guest seats on the Sunday news shows in which the Clintons offered almost word-for-word explanations about how there was “nothing to see, move along”—until the evidence mounted to the point that the truth could no longer be denied. That’s when they tried to explain it all away by blaming everything on tax mistakes, claiming they had updated their tax returns, had paid their fees to Uncle Sam, and now everything was copasetic. Any reference was now brushed off as “old news,” usually accompanied by Hillary’s forced laugh, as though if it’s no big deal to her, why should it be to anyone else?

But as the saying goes: Once is a mistake; twice is a habit; three or more times is a pattern.

The latest in the never-ending Clinton scandals is mounting evidence that Hillary Clinton allowed her position as Secretary of State to help facilitate multi-million dollar donations to their organization, The Bill, Hillary, and Chelsea Clinton Foundation. There have been questions as to how the charitable donations are allocated, and it seems a paltry less than 17% is actually given as assistance free and clear. Most of the money is said to go for travel expenses, salaries, and the nebulous “other” on the ledger line. When it was originally called The Clinton Family Foundation, the same questions were raised during Hillary Clinton’s 2008 attempt at the Democrat nomination for president. Foundation records showed a great many tax write-offs and gifts that would generate “good will” and/or endorsement for Hillary Clinton’s campaign. These allegations were denied as mere coincidence regardless that the timing was extremely suspect. The very same thing is occurring again only this time it is not just endorsements being sought. On its face, donations have all the markings of influence peddling, including allowing the office of Secretary of State to “make things possible” for other nations in exchange for monetary donations to the Clinton family charity.

So now we have been told that the Foundation will re-file amended tax returns to “correct errors” and erase “typos” due to the statement that no money was donated from foreign or U.S. Government sources for the last few years–a sharp drop-off from the years preceding.

We await the publishing of the book “Clinton Cash” by author Peter Schweitzer, out the first week of May. The pre-published scuttlebutt by those who have an inside track is that the book is an investigation of foreign donations to the foundation. It will purportedly show how the Clintons, whom Hillary referred to as “flat broke” when leaving the White House in 2000, were somehow able to manage to obtain mortgages for two multi-million dollar estates and a personal wealth exceeding $130 million dollars since them.

Perhaps they will once again blame everything on their tax accountant–or that evil vast right wing.