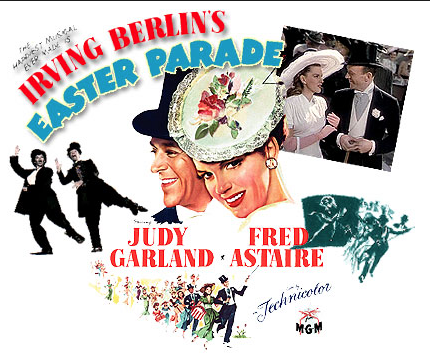 Many outstanding religious films are being released this Easter on the small screen all of which are informative and inspirational. However, if your looking to include a fun and lighthearted Easter tradition as well, you can’t go wrong with the classic MGM musical, “Easter Parade”.

Starring Judy Garland, Fred Astaire and Ann Miller (does it get any better than that?) “Easter Parade” has been an MGM success since it’s release in 1948. The story takes place in 1912, as Don Hewes (Astaire) and Nadine Hale (Miller) are a famous Broadway dancing team. Nadine (Miller) decides to leave the team and start her own Broadway career as Don (Astaire) becomes furious and insists he can replace Nadine with anyone. Hannah Brown (Garland) is dancing in the chorus and Don randomly picks her out to replace his former partner.

Trying to force his new partner Hannah (Garland) to be an exact replica of Nadine, the new duo have little success till Don realizes his mistake after seeing Hannah perform without his influence. Now enjoying tremendous success on Broadway, Don and Hannah are invited to the opening night of Nadine’s new musical. Thinking Don has only used her to make Nadine jealous and realizing her own feelings for Don, Hannah decides to leave the duo. Don is despondent since his feelings for Hannah are the same, but soon Don and Hannah become reunited when Hannah serenades Don with the song “Easter Parade” to win him back. They become engaged walking together in the famous New York City Easter parade.

Music by Irving Berlin with classic performances from Judy Garland, Fred Astaire and Ann Miller (“Couple of Swells”, “Stepping Out With My Baby”, “Dancing the Blues Away”, etc.) make “Easter Parade” one of the best and most loved MGM musicals of all time.

(Astaire and Garland at their best: “Couple of Swells”)