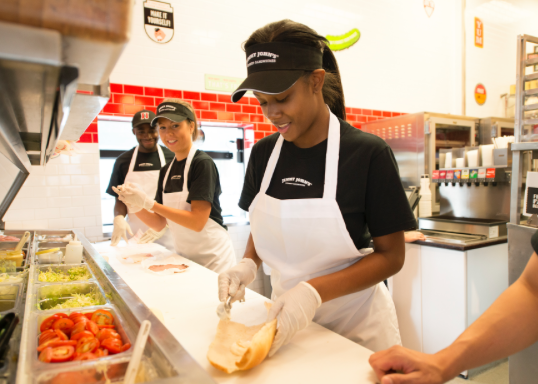 At the center of the political debate is one issue that is very rarely agreed upon – wages for employees and common business practices. Typically, the left wants crazy high wages to become the ‘norm’ for minimum wage. Places like L.A. have raised their minimum wage to $15/hour. The right tends to be pro-business because of their ability to greatly impact our economy via job growth and expansion.

For years, I’ve struggled to figure out where I stand on this issue. I was always somewhere in the middle of the debate. In reality, there are no “simple solutions” for these things. One thing I do know is that no one should get paid $15/hour to flip burgers at McDonalds. It’s not a high-skilled job, therefore employees shouldn’t be paid the salary of a high-skilled laborer.

When I was in college, I had a couple of retail jobs in a right-to-work state. I worked as a cashier at Cracker Barrel, where I frequently worked 10-hour shifts with very few breaks. Company policy stated all lunches were on the clock. Sounds like heaven, right? Wrong. What it meant was that cashiers, like myself, were able to get a break but if the store got busy and backup was needed, you were expected to return to your post. You weren’t off the clock so they were allowed to do it. I would frequently come home with sore feet and my daily regiment involved soaking my feet in Epsom salts to help with the blisters from standing most of the day.

Even though people make fun of Walmart, it was one of the better jobs I had in college. I made more the minimum wage, I was able to use the bathroom when I needed to and breaks and lunches were mandatory. In fact, if we didn’t take our lunch before our five-hour mark, we would get written up.

Working in a right-to-work state was interesting. Employees were frequently worried about job security because their employer could easily fire them without any sort of explanation. And it was 100% legal. Employers could schedule employees for more than eight hours and they didn’t have to pay the employee time-and-a-half.

Now that I’m working in California, it’s interesting to see how vastly different the two states are. Businesses have ridiculous restrictions on them in places like California. If an employee wants to work through his or her lunch, there’s no waiver the employee can sign waiving their right to lunch. There have been many times where I’ve wanted to work through my lunch and leave earlier but I had to take a lunch because of state law.

What businesses (and employees) need is a compromise between the two extremes. Employees should be given adequate breaks and lunches if they work a full eight-hour shift. Businesses should have the ability to allow employees to choose if they want to use those breaks and lunches or if they would rather forfeit those breaks in return for additional time on the books. Government shouldn’t mandate overtime pay if an employee works more than eight hours.

Jeb Bush At FITN: "I don’t see any coronations coming my way"

FASHION: Are You Confused About "Appropriate Attire"?