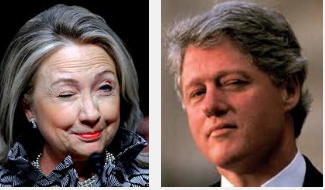 One of the reasons the many scandals involving Bill and Hillary Clinton never result in real consequence is the complicated nature involved.  On surface, they have so many twists in plot and logic that most people, used to having a life crisis solved in under thirty minutes of television programming, tend to turn off, tune out, accept the easy generalization from the cadre of defenders that it is old news, a plot hatched by evil Republicans, the “Nothing to see, move along” offered. In fact, the wrongdoing is quite easy to comprehend so long as it is shown by anyone not bent on hiding Clinton culpability.

The upcoming release, “Clinton Cash” by Pete Schweizer is going to re-count several instances in which the Clinton family benefitted financially from Hillary Clinton holding the office of Secretary of State during the first Obama Administration, and from the prospects of her winning the 2016 presidential election, all but given if you listen to the left media. A pre-publish agreement was made between the author and the New York Times, they published a recent expose on the unethical and criminal behavior of Secretary Clinton involving American-controlled uranium, but the snaking and switchbacks needed to keep the story straight have once again rendered this scandal “too hard to understand” by the general reader.

On his April 23rd broadcast, radio show host Mark Levin took the New York Times story apart piece by piece, using their report and that of the Business Insider to re-tell the points made in language understandable to you and me. Rather than post Levin’s entire transcript, I will re-tell using Mr. Levin’s explanation minus some of his editorial commentary.

Major donors to the Bill, Hillary, and Chelsea Clinton fund sold half of America’s uranium to Russia.  The uranium was used for nuclear weapons, among other things. 20 % of all America’s uranium, a natural resource, now belongs to Russia.

Canadian company Uranium One owns uranium mines in the United States and Kazakhstan. Their U.S. mines account for 20% of the total uranium mined in our country. Uranium is used for nuclear weapons; it is not only a natural resource but is considered a strategic asset to the United States.

Russia’s state-owned atomic agency Rosatom bought a 17% stake in Uranium One in June 2009.

In June 2010, Russia decided it wanted to own 51% of Uranium One. In order to get this, the front company Rosatom needed to get approval from the special committee of the U.S. government. The investors in Uranium One gave money to Clinton’s Foundation beginning in 2005 and continuing through 2011. Additionally, on June 29, 2010, Bill Clinton was paid half a million dollars to speak in Russia by an investment bank with ties to the Russian government and also connected to Uranium One – the same month the Russians closed the deal on Uranium One.

Following this, the special committee, the U.S. Committee on Foreign Investment, was charged with reviewing the deal that would give Rostrom, the Russian state-owned atomic agency, a majority stake, as uranium is considered a strategic asset with implications for National Security.

Four Members of Congress signed a letter expressing concern over the deal, and two others drafted legislation to kill it. But final say over the deal rested with the special committee, which approved it in October 2010.

In January 2013, despite assurances to the contrary, a subsidiary of Rosatom took over the entire company even though it promised it wouldn’t, and then de-listed it from the Toronto Stock Exchange; in essence, they went private.

Hillary Clinton was required to disclose all of the Foundation’s contributions before she became Secretary of State, but the Clintons did not disclose millions in contributions from the chairman of Uranium One while the review of the deal was on-going.

Of late, White House and Administration spokespersons and the ever-present defenders of Hillary Clinton protest there is no quid pro quo, some using the fact that Clinton did not make the approval decision on her own. First of all, the decision was made by politicians.  How many times have we witnessed one politician doing a vote-favor for another with the understanding he would be recipricated later when he needed it? More importantly however, none of the other Cabinet Members of the special committee were aware of the more than generous monetary contributions made to the Clinton Foundation by those seeking the approval of the deal. Would any or all of the committee members have declined approval had they known of the cozy relationships?

Others claim it was not Hillary Clinton who received the contributions, but the Foundation itself. As the secretary of the Foundation, and then a named partner, of course she benefitted from the contributions. Every member of the Bill, Hillary, and Chelsea Clinton Foundation receives tax write-offs and other benefits, not to mention that their charitable works have a very low fifteen-cents-on-the-dollar giving rate, the other 85% said to go toward travel expenses, salaries, and a bookkeeping entry with the nebulous title “Other.”  Additionally, Hillary Clinton receives financial gain any time her husband receives payment for one of his speaking engagements under the guise of the Clinton Foundation.

This particular moneymaking scheme follows a distinct pattern, a template if you will. From Whitewater to the illegal selling of access to government property and officials in exchange for campaign contributions, the funding irregularities of both Hillary Clinton’s Senate campaign and her run for the Democrat nomination in 2008, and all the others in between–it is always a tangled web of deceit, shadowy figures, money disappearing, followed by feigned outrage that anyone should question her motives, her integrity, her good will. The minions spread out, castigating all who turn a reasonably suspicious eye on suspicious doings as haters, misogynists, partisans, liars, and other insults. In the end, we’re all supposed to believe Hillary Clinton has led a life filled with the most incredible coincidences imaginable.

That is a fool’s errand; the math just doesn’t add up.