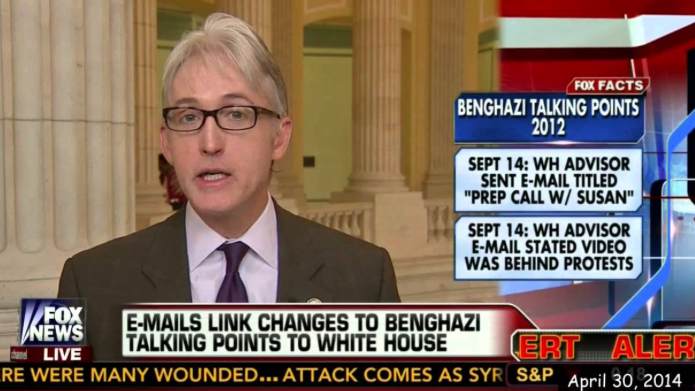 Once again Congressman Trey Gowdy has been accused of “slow-walking” the Benghazi investigation in order to coincide with Clinton’s presidential bid. This must be projection at its finest. If you’ll remember, precious time was wasted back in April 2014, when Democrats begged Nancy Pelosi not to appoint any “blue bloods” to the select committee. After a month of temper tantrums, Pelosi finally agreed to take part in the hearings, but then stalled by putting in a ridiculous request that the committee be “completely balanced.” After more time evaporated, Pelosi finally grasped the understanding of what her title meant as the Minority Leader of the U.S. House of Representatives–and only at that time was Congressman Gowdy able to continue with scheduling an actual hearing.

Thanks to Fox News coverage, I don’t need to outline the time spent on trying to comprehend the arrangement Hillary Clinton had with herself in regards to her emails and (now spotless) server. Nevertheless, each Democrat is watching this latest Clinton scandal unfold all while saying Congressman Gowdy is to blame.

Once the State Department, members of Congress, and some information was handed over, the first Select Committee hearing was conducted in September 2014.  As stated by many on both sides of the aisle, this select committee is extremely important in order to prevent future tragedies. Todd Keil, a member of the State Department Best Practice Panel disclosed,  “Almost 15 years ago, a number of very similar recommendations were made after the East African Embassy bombings, and little has been accomplished by the Department by State since then…”

It may seem like President Obama has been in office forever, but the truth is, the State Department has been asleep at the wheel long before his shocking triumph. Bottom line, this is larger than a presidential election, this about saving lives and people being held accountable for their lack of attention to their everyday, overpaid, jobs.

Conservatives are usually branded as gun wielding, insensitive folks, but it is mostly the GOP sympathizing with the families of those victims lost in Libya. Benghazi symbolizes systematic failure within the Department of State. Luckily, we have Congressman Trey Gowdy to crack the whip on those who believe they are above the law.

Who Says It's Time For A Woman President?