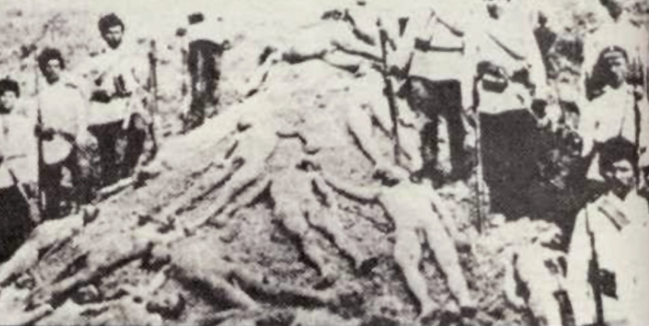 “Who, after all, speaks today of the extermination of the Armenians?”- Adolph Hitler, Obersalzburg 1939.

This week memorializes 100 years since the Armenian Genocide, part of the larger genocide when the Islamic Ottoman Empire murdered 3.5 million Armenians and Greeks from 1914-1923 because they were Christian. Hitler’s Obersalzberg Speech – given shortly before invading Poland and undertaking the murder of 6 million Polish Jews and Christians to create “lebensraum”– revealed how emboldened he felt by the world’s silence at the Armenian Genocide. Today, that silence continues as Islamic groups persecute, murder and ethnically cleanse Christians throughout the world. And meantime our current President refuses to identify radical Islam as the cause, instead bashing Christians for being on their “high horse” and “unloving”. Even on this 100th anniversary, the President refuses to use the word “genocide” to describe the slaughter of 3.5 million Christians, lest he offend Islamic Turkey.

The Armenian Genocide remains mostly ignored by history, in part eclipsed by the horrific devastation of World War I and later World War II and the Jewish Holocaust, and in part due to political aversion at ruffling the feathers of NATO “ally” Turkey, which continues to deny the Genocide and attack anyone mentioning it, including most recently courageous remarks on the genocide by Pope Francis. The Mainstream Media also has been complicit in this evil silence. The New York Times refused to use the term “genocide” until 11 years ago.

In today’s Mainstream Media, Islamic atrocities against Christians virtually do not exist. Instead, an odd-sounding group named “Boko Haram” murders and kidnaps “village girls”, or “al Shabaab” massacres Kenyan “university students”, or an acronym “IS” or “ISIS” engages in mass murder, rape and enslavement of “Yazidis”. Carefully scrubbed from most accounts is that the perpetrators are Muslims and the victims are Christians because they are Christian. Similarly, the Armenian Genocide is rarely if ever presented as the Islamic Ottoman Empire ethnically cleansing Christians from what is now Turkey, a monstrous feat successfully accomplished with absolutely no adverse consequence from the rest of the world.

Also ignored is that, as genocides go, the Ottomans were uniquely brutal. Unlike their coldly efficient Nazi successors-in-crime, the Ottomans Islamists did not only seek to exterminate a religious group, they did so with brutish sadism. They engaged in systematic mass rape of Christian girls and women. One historian noted how Christians would be marched into the desert, stripped naked, and left to suffer prolonged painful deaths, and how the Ottomans “drowned people in rivers, threw them off cliffs, crucified them and burned them alive.”

Does crucifixion and burning alive sound familiar? It should because it’s happening today in parts of the Middle East. Yet unlike the rarely publicized Armenian Genocide, Islamists now videotape and publicize their atrocities against Christians, so apparently unafraid they are of consequence or retaliation. And why should they be afraid? Who will punish them? President Obama? Are you kidding? Which has he given more attention to: a police shooting of a store robber in Missouri, or the ethnic cleansing, beheadings, mass rape, forced enslavement and persecution of Christians throughout the Middle East?

In 1922, the Ottoman Islamists marched into the Turkish coastal city of Smyrna, a city originally settled by Greeks in 700 B.C. that had grown to become the most prosperous and opulent city in the Ottoman Empire. Its “problem” was its large population of Greek and Armenian Christians. So, in 1923, the Ottoman military set fire to and destroyed the city, murdering nearly 100,000 Christians in the process. Offshore, warships from the United States, Great Britain and France watched. On the ships, “military bands played loud music to drown out the screams of those who were drowning in the harbor and who were forcefully prevented from boarding Allied ships.” The Allies, fearful of upsetting their relationship with the new Turkish Government, deliberately did nothing.

Throughout the Middle East today, the United States, Great Britain and France still watch as Christians continue to be massacred by Islamists, fearful of upsetting relationships with Saudi Arabia, Iran and other tyrannical regimes there. The United States provides token air support against ISIS, but partly just to help the Iranian military which views ISIS as competitors to their own vision of an anti-Christian Islamic Caliphate.

Hitler’s observation, “who, after all, speaks today of the extermination of the Armenians”, might tragically apply to our current times. More than “remembrance” is needed. The lessons from 20th Century genocides against Jews and Christians should be institutionalized, burned deep into the psyche of our foreign policy, and not merely be an occasion for tepid “proclamations” and laying of wreaths at memorials.

Leftism and Islam: It’s “For the Children”