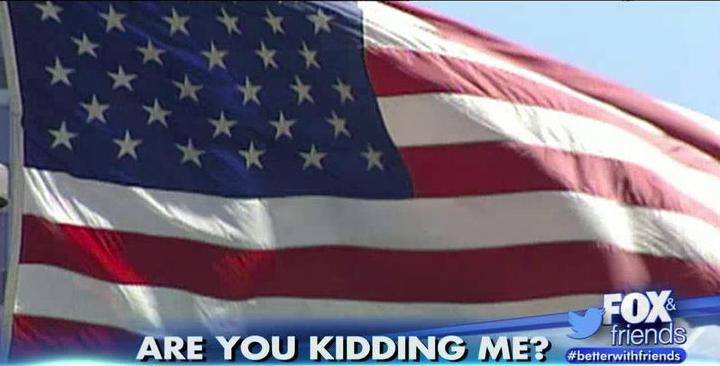 73-year-old veteran Tony Cumberworth has been flying the American flag in his yard for 20 years. However, his homeowner’s association (HOA) recently sent him a warning notice to take down the flag within four days or he’d be fined $50 a day, reports WXIA-TV.

Cumberworth reviewed the HOA bylaws but found nothing restricting residents from flying American flags. Shortly afterwards the HOA sent a letter stating, “Please disregard the code violation notice,” the message read. “It was sent to your home in error. We truly thank you for your service in Vietnam and your American flag can stay in your yard as long as your desire.”

Similarly, June 2014, Duy Tran of Webster, Texas was told by his apartment complex to remove an American flag from his balcony because it was a “threat towards the Muslim community.”

Tran explained to KHOU that another reason was given to him, “What really stunned me is that she said it’s a threat towards the Muslim community.”

Another incident in September of 2014 involved Brad Smith, a Diego State University sophomore after hanging an American flag from his balcony, was told in a written notice to remove it because foreigners could find the flag’s display offensive.

“We were then told that it was for political reasons and that the flag could offend foreign people that live here, foreign exchange students.” Smith added. “I’ve had friends and family fight to defend that flag.”

The lease agreement does contain a clause stating, “no signs or other personal property may be kept outside the premises.”

An associate of the owners of the apartment complex relented, telling ABC there was a “misunderstanding,” and that the flag would be allowed to fly.

The latest incident that caught media attention is the UC-Irvine student’s American flag ban, which was reported by CampusReform.org:

“The Associated Students of University of California, Irvine (ASUCI) voted Tuesday to remove all flags, including American flags, from an inclusive space on campus because of their offensive nature.

The bill, R50-70, was authored by Social Ecology Representative Matthew Guevara, and accuses all flags, especially, the American flag, of being ‘symbols of patriotism or weapons for nationalism.’ ”

Included in the text of the resolution is ASUCI’s disturbing rational:

Whereas flags are typically viewed as patriotic symbols of a single nation, are often associated with government and military due to their history and have a wide variety of interpretations. …

Whereas flags construct paradigms of conformity and sets homogenized standards for others to obtain which in this country typically are idolized as freedom, equality, and democracy. …

Whereas a common ideological understanding of the United States includes American exceptionalism and superiority. …

Whereas the American flag has been flown in instances of colonialism and imperialism. …

Whereas designers should be careful about using cultural symbols as the symbols will inherently remain open for interpretation. ..

Whereas freedom of speech is a valued right that ASUCI supports.

Whereas freedom of speech, in a space that aims to be as inclusive as possible can be interpreted as hate speech.

While the UC-Irvine student executive cabinet vetoed the resolution, the mind-set is a bit confused as to what freedom of speech and hate speech is. That said, such a paradigm propagated in an America college is alarming.

In each of the above cases, the core objection in flying the American flag in our own country, on our own soil, on our own residential space is because it may offend foreigners or the Muslim community.

Flags are symbols that represent a value message that is deciphered by people. Interpretation lies within people, not within the symbol. The UC-Irvine students put “language” to their sentiment but what is equally troubling is the same mind-sets is seeping into the culture as a whole, including property managers. These paradigms are being constructed within the American educational system and need to be addressed by patriots—seriously. In each case, the dissenters backed down because patriots stood their ground.

Veterans fought for what our flag stands for. Many of our soldiers died defending our values and their mission. Others came home to loved ones maimed forever.

The loss of blood and treasure is incalculable. This mind-set is not acceptable.

Who is inculcating our students and citizens to deny proudly flying the flag on our soil because it may offend Muslims or foreigners? Foreigners and legal immigrants are welcome here, if they show respect to our values, which are represented by our symbols. If someone wants to become a citizen, they should assimilate because they respect us and what we stand for, or they should seek citizenship elsewhere.