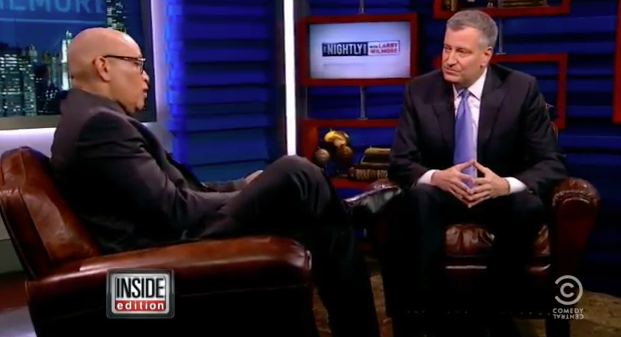 Winter is now behind as the cold wave puts a screeching halt to a tense battle between New York City mayor Bill de Blasio and the NYPD. However in light of the Mayor’s new remark on The Nightly Show with Larry Wilmore, get ready for Round 2 of protesting to occur especially after what just happened in Madison, Wisconsin.

Host Larry Wilmore wasted no time asking the mayor about one of the biggest headlines that dominated much of 2014 regarding his strained relationship with the NYPD. Noting de Blasio’s infamous claim to have ‘trained’ his biracial son, Dante, to be wary of cops, Wilmore asked,“How are you addressing the problems between blacks and the police? What is your relationship right now with the police?” de Blasio replied, “How’s that beef?”

Instead of undoing the damage de Blasio caused in 2014 to heal the rift he caused, the mayor decided to reopen the past. Standing firm with his claims, de Blasio had the opportunity on live national TV to repair the relationship, but instead opted on his belief that NYPD arrest young black kids due to police racism. Here we go again.

Given the A-OK approval from the mayor, anti-police protesters have taken over the streets of New York causing chaos day after day since the Grand Jury decision not to indict Officer Daniel Pantielo for the death of Eric Garner. The mayor the very same day scheduled a press conference in light of the decision to praise Garner, calling him a “good man.” The mayor from there went on to slander the police by stating that he and his wife “worry every night” about their son being targeted by cops.  “Is my child safe? are kids like Dante safe from the very people they want to have faith in as their protectors?”

The mayor’s divisive and racially incendiary remarks created an atmosphere hostile to the NYPD who saw the smear and betrayal as a slap in their face as they are the main reason crime drastically dropped to an all time low in a city that was once known as “ungovernable.”

Psychopathic behavior became obvious throughout the days of the non-stop protesting as attacks on cops occurred daily some not catching media attention. The attack of two lieutenants in the Brooklyn Bridge was supposed to be the final straw as the protestors became savages, hurting our finest and not “fighting for police reform.”

Adding vinegar to the wound, the Mayor stated the vicious attacks on the two lieutenants were “alleged attacks.” And just like that the rift continued to grow as Democrat political leaders refused to condemn the ongoing protest and instead staged their own protest in the City Council chambers. And all-time Democrat favorite race-baiting Rev. Al Sharpton continued the violence and the rhetoric being spewed of protestors who were shouting, “What do we what, Dead cops, when do we want it, Now,” despite the fact that he could have perhaps helped prevent the tragedy that occurred soon after.

A nightmare before Christmas was one of the worse and excruciating days of 2014. Two NYPD officers in Brooklyn, N.Y. were gunned down inside their marked patrol vehicles while on meal break in an ‘execution style’ murder. The gunman, 28-year-old Ismaaiyl Brinsley, bragged on Instagram hours before the gruesome attack of committing to kill two cops in revenge for the deaths of Michael Brown and Eric Garner. Later that night, the mayor and police commissioner held a press conference. Officers began to turn their backs on the mayor as he entered the hospital. The silent protest from fellow officers that also occurred in both funerals was a sign of disgust as the mayor encouraged protestors to attack police officers leading to the tragedy event of two of the finest murdered.

Police union angered by the whole situation demanded an apology from de Blasio for causing the tensions to escalate really bad. The mayor refused time after time to apologize. And as the city began to mourn and realize what has happened, the tension began to grip the city together as well as nationally as a whole in the aftermath of this tragedy.

As the protest stopped during the winter season, the second year of de Blasio mayoral continues, and the city began to see a different side of the mayor. The “changed” mayor pledged to repair the relationship with the NYPD stating, “I think it’s time for the city to move forward.” The mayor, who had campaigned as an anti-cop candidate, suddenly became pro-police in a heartbeat and de Blasio allocated $7 million in city funding for new bulletproof vests, something the police unions have been pushing for nearly 5 years.  He also renamed two Brooklyn streets after the slain officers in Brooklyn.

The dust began to settle as the relationship between the mayor and NYPD became silent in the media. However, de Blasio’s recent appearance on The Nightly Show just might open up fresh unhealed wounds as he decided to again attack the finest for the job they risk their lives daily to rehash the same talking points that started everything in December.

“It wasn’t a new thing.  A young man of color today needs to have that conversation with his family. It’s something that everyone knows. And it’s not a comment that’s disrespectful to the police. We deeply respect our police; we need our police to protect us. But it’s a comment that refers to our history and some things we still haven’t worked out. That’s the reality.”

Bottom line, the mayor really needs to avoid talking about the police, good or bad, in any way possible, especially on TV. If this rhetoric is any indication of what continues to be his narrative, the mayor needs to swallow his egocentric pride and just apologize for the comment that caused more harm than good. If he wants to woo his voter base of minorities, a simple “I’m sorry for what I said or meant” is all the mayor really needs to say and would probably cause more good than harm. The mayor can then continue being a liberal mayor with his “tale of two cities” notion and not destroy the 20-year legacy former Mayor Rudy Giuliani helped create with help from the NYPD. We shall see, as his recent little skit didn’t bring much crazy media attention and I’m glad it didn’t. I hope that 2015 will not be seen as 2014 part 2 with useless protesting that wastes NYPD resources, causing more chaos than what we experienced in 2014.

New Yorkers, I hope all want to move past this. We shall see what occurs in 2015. Stay tuned.

Obama to Radical Capitalists: Your Ideas Only Work on Bumper Stickers