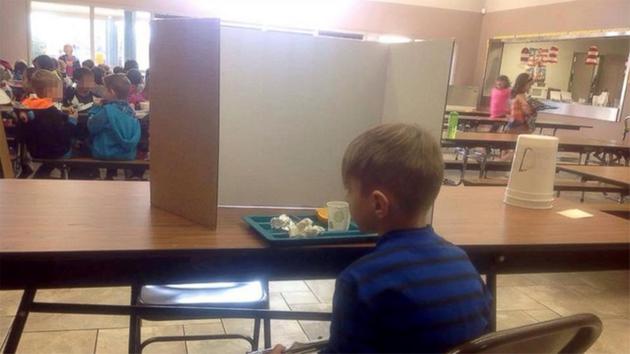 Folks are outraged after seeing a picture of a 6 year old in isolation for being tardy at a school in Oregon.

I understand the outrage. It certainly irritates me and if it were my child there would be some serious discussions, probably with a lot of yelling on my part, with the school administration.

Hunter Cmelo, a first grader at Lincoln Elementary in Grants Pass, was forced to sit alone behind a divider at lunchtime. School district officials said it was part of the principal’s punishment plan for students who are tardy.

Children in elementary school are almost never the reason for their own tardiness. Parents are responsible for either getting them to school or to the bus stop in time, so when a young child is tardy, it is usually the parent or guardian’s fault.

The shunning of the student occurred at lunch time where he sat alone at a table with a make-shift screen shutting the rest of the cafeteria out so that he could “catch up” on his missed work resulting from the tardiness. I’m sure that cardboard screen did a lot to shut out the noise of a cafeteria and foment deep concentration.

According to the Super he can understand why a parent might be upset to see their child in this situation. After all, anytime a parent sees a child in a “unique learning environment” it may cause some sort of reaction.

This picture definitely shows a “unique learning environment.” What is the child learning here? To be embarrassed that he was late to school due to circumstances beyond his control? That he deserves to be shunned? That the missed school work is so important that he has to be segregated from the rest of his peers at lunch time?

My questions are many, but the most obvious would be: Why didn’t they put him in the office? Or an empty classroom where a teacher could oversee his work? Separate him from the crowd? If he has to make up the work, then yes, by all means, help him to make that work up, but do it in a responsible manner and not something akin to adult bullying.

I think this “unique learning environment” must be along the same lines as when they call the Common Core “rigorous.” It’s a downright lie and a bunch of gobbledygook thought up by a bureaucrat or politician. Making the words sound pretty does little to hide the actual stink.

Dems Getting Rid of Hillary--Will a New 'Unknown' Candidate Emerge for 2016?