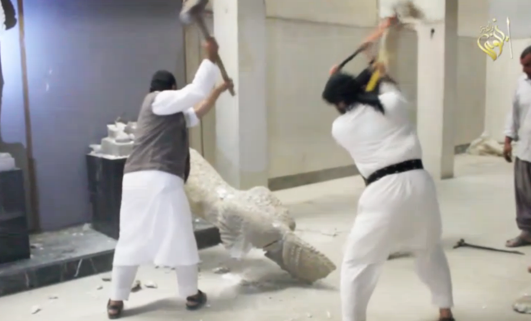 United Nations Secretary-General Ban Ki-Moon said he considers the latest acts of ISIS to be “a war crime”. So, what act did the evil ISIS thugs finally commit that pushed the UN to declare the group guilty of war crimes? According to a report from Baghdad, a UN official reportedly told the press on Friday that, “Islamic State extremists trucked away statues and they damaged the irreplaceable remains of an ancient Assyrian capital.”

Yes, you read that correctly…it was not the beheading of 21 Christians from Egypt, it was not the death of the Jordanian pilot who was burned alive, nor the beheadings of numerous other individuals, and it was not the murder or rape and human sex trafficking of women and girls as young as a year old. No, the outrage came from the senseless destruction of inanimate historical artifacts. Somehow, the only thing that makes sense in this story is that it comes out of the city of Nimrud.

The city of Nimrud has roots in the Biblical character Nimrod, discussed in Genesis 10:11 and other places in the Bible. The name Nimrod means “to rebel against” and it was against God that he rebelled. The artifacts destroyed were artifacts to false gods. Nimrod attempted to stop any threat to his throne by killing all new born males. His closest aid, Terah, was 70 and childless. It was Terah who would father a son and that son would be Abraham. Nimrod would forever be associated with fools because he was outsmarted by a servant…but more honestly, by God.

This brings us back to the city of rebels, or the city of fools, Nimrud. While it is tragic that so many artifacts mentioned in the Bible are being destroyed, it is more tragic that these are the actions that garner the world’s attention. The human suffering at the hands of ISIS/IL cannot be properly put into words, but it is shameful that the United Nations waited for such an act to occur before decrying ISIS actions were war crimes.

One of the local men living in the area and who reportedly studied at one of the Fine Arts Institutes in Iraq before ISIS closed it down said, “Only people with a criminal and barbaric mind can act this way and destroy an art masterpiece that is thousands of years old.” While he is correct that they are criminals and barbaric, it isn’t the masterpieces they destroyed in Nimrud that should be mourned the world over. It is all of the masterpieces they have slaughtered by beheading, gunning down, or burning alive.

More outrage should come at the destruction of God’s masterpieces; or as David wrote in Psalm 139:14, “I will praise You, for I am fearfully and wonderfully made; Marvelous are Your works, And that my soul knows very well.” The handy work of God is also noted in Jeremiah 1:5, “Before I formed you in the womb I knew you, before you were born I set you apart; I appointed you as a prophet to the nations.” So, it is the human lives destroyed that should bring the outrage from the World and not the destruction of stone idols.