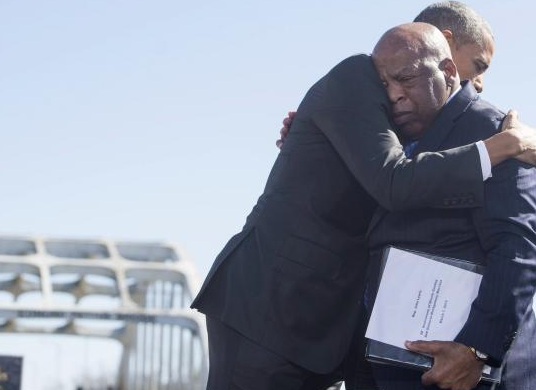 “Every great dream begins with a dreamer. Always remember, you have within you the strength, the patience, and the passion to reach for the stars to change the world.” ~ Harriet Tubman

Born into slavery in 1820, Harriet Tubman would lead a remarkable life. Not only did she successfully escape from slavery but she would return to the South 19 times to lead over 300 slaves to freedom. The life story of Harriet Tubman inspires and propels me to lead a better life. It is appropriate to look to the past for inspiration and as a reminder to not make and or repeat the same old mistakes. But it is a wasteful exercise to look to the past if it is only as a reminder of old wounds or an attempt to display a political narrative as such was the speech of President Obama in Selma this past week.

On that iconic bridge in Selma, President Obama, who mentioned the name Ferguson almost as many times as he mentioned Selma, failed to proclaim a new vision for black America. And black America needs a new vision. Under the Obama administration blacks in America have moved backwards instead of forward. Black Americans also need a vision for employment.  As of February of this year the unemployment rate for black Americans was reported at 10.4 percent. The same February report stated that the unemployment for whites was 4.7 percent, 6.6 percent for Hispanics and 4.0 percent for Asians. Where is the vision on employment for black America and why would President Obama stand on the bridge in Selma and not mention this?

With 72 percent of black children being born to unwed mothers, the failure of the black family has reached beyond a critical state. Psychologist have documented that single parent children are 3 to 4 times more likely to have emotional and behavioral problems. These children also have a higher rate of suicides; lower self esteem and higher uses of drug and alcohol abuses. Where is the vision on strengthening the black family for black America and why would President Obama stand on the bridge in Selma and not mention this?

President Obama stated “what happened in Ferguson may not be unique but, it is no longer endemic…” but he also failed to mention that per the FBI crime report in 2013, there were 2,245 blacks who were murdered by other blacks. The total number of all blacks murdered that year was 2,491 preponderantly documenting that the greatest threat to black lives is not that of white police officers but of other blacks. Where is the vision on reducing black on black crime for black America and why would President Obama stand on the bridge in Selma and not mention this?

President Obama did mention the importance of voting. “What is our excuse today for not voting? How do we so casually discard the right for which so many fought?” Uniquely, black voting patterns are close to parity with whites. Per the Joint Center for Political and Economic Studies, for the 2012 election 73.1 percent of blacks were registered to vote and 66.2 percent voted.

This past Sunday I had to move my clock forward to be in sync with the time change.  I strongly suggest that we, as black America, do likewise. Let us move forward, because there is much work ahead of us to do.

What Do the 'Princess of Darkness' & Dumpster Diving Have in Common? Oregon Politics!