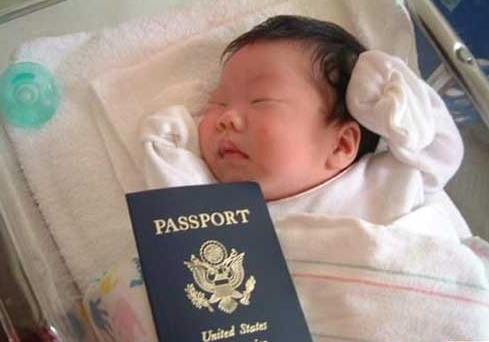 The reasoning behind this mandate is obvious: People born in this country, presumably to live out much if not all of their lives here, should have the rights and responsibilities of citizenship conferred upon them – without the need to endure wearying degrees of paperwork for the purpose of establishing what should be the evident fact that they are of this land.

Unfortunately, in modern society, this constitutional declaration has given rise to the phenomenon of “birth tourism.”  This maneuver (which was recently uncovered out of China, though the practice is common in surrounding nations as well) will pay a local company to help them “visit” the United States solely for the purpose of giving birth. The resultant babies will then automatically be counted as American citizens. This bestows upon them a number of rights and privileges, most crucial among them for the women going to all of this trouble being eventual access to America and all of its freedoms, while creating a burden on its economy.

Aside from the fact that it ought be patently offensive to American sensibilities that the compassionate birthright citizenship clause of the Constitution is being so flagrantly exploited by those in other parts of the world who have figured out how to hack the system, there are practical concerns when large numbers of foreigners destabilize local economies. Children born as automatic citizens, whether they remain in the U.S. and have any allegiance to this country or not, have access to public assistance benefits that place a wearying burden on taxpayers. They qualify for free or heavily subsidized education in state schools (again, the primary reason their parents embark upon these schemes), consuming valuable admission spots that could have been used by others. Swarms of pregnant women living in local housing (arranged for them on a mass scale by the birth tourism companies they patronize) drive up demand for real estate, placing yet more resources out of reach of locals.

It sounds a lot like an illegal immigration problem, with the peculiar trait that it is not necessarily illegal. There is, in essence, no law against visiting the United States while pregnant, and obviously a woman cannot be forbidden from giving birth. Nevertheless, federal authorities take the issue seriously, cracking down on it as much as possible. Visa fraud and tax liability issues plague the companies engaged in this practice, creating avenues for resisting the phenomenon. But actual bans on birth tourism have consistently failed to pass the legislature for a variety of reasons, mostly boiling down to a lack of will. Americans are being victimized every day by this fraudulent, disingenuous “business”, and real action needs to be taken by politicians willing to get their hands dirty.